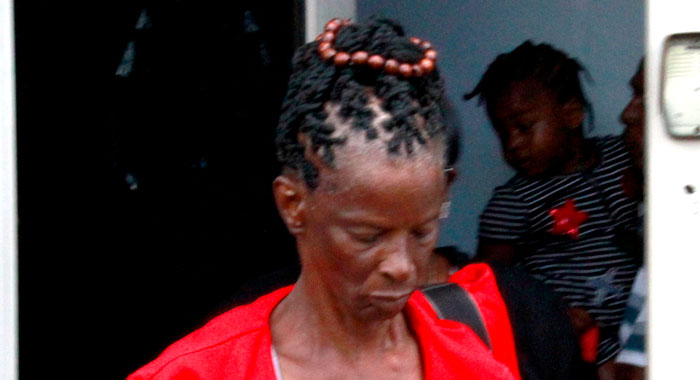 The 60-year-old woman who was videotaped kicking a 5-year-old girl has pleaded guilty to a charge of assault and ill treatment of a minor.

Thotelyn Wilson, a farmer and vendor, of Lowmans Hill, pleaded guilty to the charge when she appeared before Senior Magistrate Rickie Burnett at the Kingstown Magistrate’s Court on Monday.

However, the woman was not sentenced immediately, as the magistrate observed that he was not presented with some of the information — including a social inquiry report — that he needs to make an informed decision.

He said that while the case was before him, the investigation was incomplete.

The court heard that the child’s mother abandoned her when she was 3 months old and her father has no fixed place of abode.

As a result, the child’s father asked the defendant to help him to look after the child, who is of no biological relationship to the defendant.

On Feb. 20, 2018, Wilson was at home waiting for the child to return from school when she got word that the child had some stolen items in her bag.

The child had in her school bag a number of items that did not belong to her.

Prosecutor Sergeant Cornelius Tittle told the court that when Wilson and the child got home, the defendant began to beat the child “in an excessive manner”.

“Kick, box, beating her with the bag, your honour,” the prosecutor said, adding that the ordeal lasted about three minutes.

A report was made to the police and Wilson was charged.

After reviewing the injury form, the magistrate said that the facts presented by the prosecution suggested that the child was beaten excessively.

He, however, said he was trying to make a connection between the information presented by the Crown and what was recorded on the injury form.

“I am not seeing the connection,” the magistrate said.

The prosecutor then told the court that there was a video, “And one would have seen—”

“One would have seen, except me, because I don’t look at those things. I have to go with what I have before me.” the magistrate said.

A 2.5 minutes long video circulated on social media last week shows a woman kicking a female child three times, in addition to hitting her in the head and back.

The child was wearing a school uniform resembling that of the Lowmans Hill Primary School.

The beating had taken place after the woman had removed a number of items from a school bag.

During Monday’s hearing, the Magistrate said that the medical report said that the child had no tenderness to the body, no abrasions, and no signs of recent injury.

“That’s what I have before me.”

Tittle told the court that he is not able to offer any further assistance in that regard and asked the court to make whatever decision it deems appropriate.

“You are the one in charge of presenting the facts to the court and I have to go based on what I have before me. That’s all,” the magistrate said.

At that point, a woman, presumably a social worker, went to the bar table and said something to the prosecutor.

The prosecutor then told the court that the doctor had examined the child one week after she was abused.

The magistrate then asked about a social inquiry report and was told that one was done.

He said that if Social Services were involved in the case a report should before the court.

“Your honour, [the Social] Welfare [Department] is currently investigating this matter,” the prosecutor told the court, after consulting with the social worker.

“Currently investigating? Then why is the matter before me now? All that should have been done,” the senior magistrate said.

Tittle told the court that his information is that instructions were given for the woman to be charged.

The prosecutor then asked that sentencing for the matter be adjourned until the court has received the social inquiry report.

At this point, Burnett engaged lawyer Grant Connell — who was sitting at the table but not involved in the matter — telling him that he seems to know a lot about the matter.

The magistrate, in his deliberations, often engages any lawyer at the bar table.

Connell told the court that he would choose his words very carefully as the case seems to have been tried by public opinion before getting to the courts.

“What should be done to her, why she did it, etc., etc.,” he said, noting that what the court goes on are the facts represented to it.

He said that the medical report does not support the Crown’s claim, adding, “But the police always puts the cart before the horse.

Connell said that if the social inquiry report had been done, the court could have got a better understanding of whether the child is fit to continue living in the current environment and what is her mental health status there.

“Then the court would be able to make a proper decision. But, to come here and pre-empt that that video would take some kind of precedence or play some role in the court–”.

Connell said that if the accused is on bail, the matter could be stood down to give the Social Welfare Department time to complete its investigation.

The lawyer said that the social inquiry report could inform the court’s decision about the child, adding that at the same time, the accused woman cannot be held in limbo.

“We have to render justice with mercy,” he said, adding that things happen and in blink of an eye people can react.

“We are all animals. We have an instinct and sometimes we all make errors,” Connell said.

The magistrate then asked the prosecutor what he wanted the court to do, saying that with the absence of a report, “Clearly, it is a problem.

“The matter is before me, a plea has been entered and now I am hearing that the investigation seems to be on-going.”

The prosecutor asked that the matter be stood down to allow the court to receive the social inquiry report.

“You see, when I sit here, I am not for the prosecutor nor the defence. I cannot give you chance to stand down that which should have been done. That’s not how the court functions.”

The court was told that the child was in the father’s custody.

However, the magistrate suggested that the arrangement must be a temporary one.

“He is the one who caused the child to be with her. So when this is over, it is possible that the child is going back,” he said.

The senior magistrate said that the Social Welfare Department must be involved in the matter somehow.

He then stood the matter down for about an hour before deciding to send the matter back to the Family Court, where the next hearing will take place on Thursday.