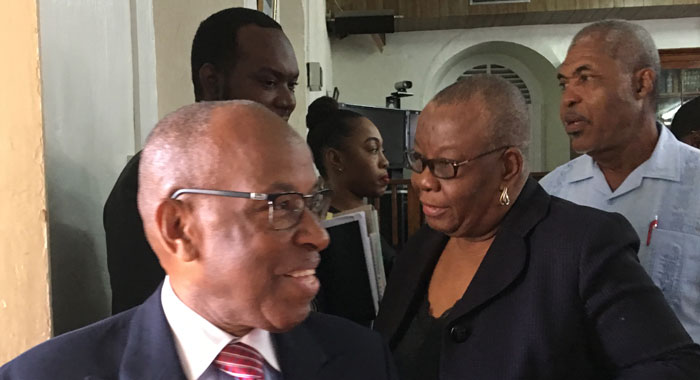 The two petitions challenging the results of the 2015 elections will go to trial, but without the benefit — at least for now — of information garnered from examining the ballot boxes used in Central Leeward.

On Tuesday, High Court judge, Justice Esco Henry dismissed an application by Ben Exeter to be allowed to inspect the ballots used in Central Leeward.

Henry ruled that the application was similar to one that Justice Brian Cottle dismissed in 2015, and was, therefore, an abuse of the court’s process.

She suggested that the petitioners could have appealed Cottle’s decision.

However, Cottle’s decision had been handed down a day or two before the expiration of the time that the law allows for the filing of election petitions.

The judge also ruled that the Registrar of the High Court, in consultation with the parties, must fix a date for case management and trial and issue notices of hearing.

She adjourned the hearing of the election petitions to a date to be fixed by the registrar, in consultation with the parties.

Lawyers for Exeter, who was the main opposition New Democratic Party’s candidate for Central Leeward in the 2015 general election, had asked the court in December to allow their client to inspect the ballot boxes.

However, Exeter file a petition challenging the result, and in the motion to inspect the ballots boxes, argued in December that the design of the ballots contravened the election rules.

The judge, however, said that the second motion, which was filed last July, was similar to the one filed in 2015.

NDP lawyers ‘we accept the ruling’

Queen’s Counsel Stanley “Stalky” John, who heads the petitioner’s legal team, in an immediate reaction to the judgement, told reporters outside of the court, his understanding of the ruling.

“The bottom line is that the judge is saying that given that another judge, who is a High Court judge, heard an application for inspection of the ballots, that she, properly, cannot now overrule that decision,” John said.

He said that he was satisfied that the arguments he put forward during the two days of hearing in December were sound, adding that nothing in the judgement said otherwise.

“The critical issue is this: the issues concerning why there should be inspection, according to the judge, could have all be dealt with or are all covered by the application made before the petition was filed.

“Now, we may have other views on that but we accept the ruling of the judge going forward. This matter is not appealable because it is an interlocutory hearing. So we must go forward on the basis of the ruling that was made by the judge towards the trial,” John told reporters.

He said that his legal team would have to access the extent to which the decision impacts the merits of the case, noting that the judge was not in a position to read the judgement in full to the court on Tuesday.

“So, until such time as we have had an opportunity to read the judgement in full and assess the reasoning in the judgement, we won’t be able to say exactly to what extent it impacts on the merits of the case at the trial. But the judge felt that her hands were tied because of the decision, which was made before.

“And we know, of course, that this case has a long history. Not only has there been pronouncements, by the High Court, there has also been a pronouncement by the Court of Appeal in relation to the manner in which it has been progressing.”

The petition were given a new lease on life when the Court of Appeal ruled last March that Cottle had shown apparent bias in his decision to dismiss the petitions as improperly filed.

The appellate court also reverted the petition to the High Court to be heard expeditiously, by a different judge, and Henry was assigned the case.

“So we will see what happens when the trial takes place because it is always open to the court, based on the evidence, based on the pleadings, to determine whether or not it wishes to look at the ballots or the counterfoils or to open the counterfoils. So this is not the end, as it were,” John said.

He noted that the judge’s ruling on Tuesday referred to what he said was “the acknowledgments in sworn statement by the election officer that hundreds of ballots were counted that ought not to have been counted.

“So it is not a situation where the judge is finding that nothing went wrong with the election. The judge is saying that another judge has pronounced on the question of whether or not there should be inspection and that in those circumstances she does not think it is proper for her to deal with the same issues again.”

Graham Bollers, a lawyer for the respondent, also welcomed the court ruling.

“We are looking forward to the release of the judgement so we can peruse it. The judgement validates all our arguments that we posed before the judge,” Bollers said.

The respondents had last year agreed Exeter inspecting four of the ballot boxes used in Central Leeward, if the court so allowed.

However, Exeter’s legal team rejected the offer, choosing instead to seek the court’s permission to inspect all the ballot boxes.

Bollers was also confident that his clients will ultimately win when the trial of the petition is complete.

“Very confident,” he said when asked about how convinced he was that the legal arguments are on his clients’ side.

“We are pleased with the results today,” he said.

And Sir Louis said he felt “somewhat relieved” by the judgment.

“I think it is very difficult to disenfranchise the people of Central Leeward, have what they did on December the 9th [2015] come to nought. I think the judge has ruled, we have to accept her ruling.”

Straker said that it has to be borne in mind that he has contested five elections, three of which were conducted under the NDP administration.

“I have no question in my mind that the people of Central Leeward have spoken through the ballots. As [former prime minister and NDP founder] Sir James Mitchell said, you cannot win an election in court. You have to win it at the ballot boxes, and I am confident that what the people of Central Leeward have done on the 9th of December 2015 remains valid and will continue to remain valid to the end of the term that they have elected me for.”

Told by iWitness News, “So in essence, you are confident that you will win the petitions?”, Sir Louis, who had earlier ignored another of our questions, walked away without answering.

The NDP has also filed a petition challenging the results in North Windward, which electoral officials say was won the ULP’s Montgomery Daniel, who was returned for a fourth consecutive term.

The ULP secured a fourth consecutive term in office by taking eight of the 15 parliamentary seats, electoral officials said.

And Leader of the opposition and President of the NDP, Godwin Friday said that his party has full confidence in its legal team.

“We have had setbacks and we have had triumphs. This is how litigation proceeds and we are determined to proceed on the basis of the ruling that we have had today and on the evidence and the preparation we have done.”

He said that when the full judgement is received, the NDP will take into account how that affect the petitions going forward.

“But the petitions go forward and we will make the case the strongest way, the best way we can, based on the ruling that we had today and what we know already.”

“The court did say that Exeter had in his possession certain evidence so we will have to make an assessment as to how it affects the argument going forward. But go forward we will.

“It is very important for the people of this country to know how the elections were conducted. So, of course, we would want to have a determination completely on its merits.”

The opposition said that the petitioners would present the best evidence that they have at their disposal.

“Election petitions, the way in which the law has evolved, is extremely difficult to get the sort of information in the timeframe provided and to perfect the application, to fill every gap …, cross every T and dot every I.

“I think we have done an extremely good job on the part of our petitioners and our counsel to bring the best case that we can on behalf of the people of this country.

“We know that the election petitions have merit because of the nature of how the ballot boxes were designed. There are questions as to how you actually prosecute in the court. The court has made a ruling today, we will assess and well will come again because we have done so in the past, and we will continue to do so. We are very confident about that,” the opposition leader said.