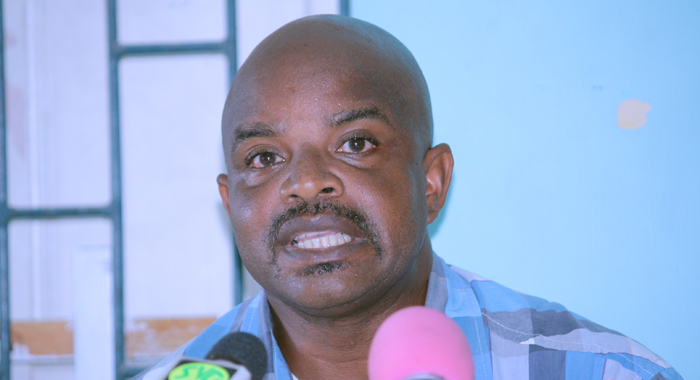 The poorest workers in St. Vincent and the Grenadines will benefit the least from the tax reductions that Minister of Finance Camillo Gonsalves announced in his 2018 Budget, according to the Public Service Union (PSU).

The finance minister further announced that personal income tax would be reduced from 32.5 to 30 per cent.

At a press conference in Kingstown on Wednesday, PSU president Elroy Boucher said that his union is pleased that some workers have been given a tax break.

He, however, said that when the tax reductions are examined closely, they do not redound to the benefit of the workers who need them most.

He said that since 2005, there have been reductions in the tax rate for the highest paid officers.

“So it has moved from 40 per cent, right now down to 30 per cent. But when we examine it, really and truly, there is a tax rate that applies to all workers.

And while the highest rate has fallen by 10 percentage point, “the others in the middle — 10 per cent, the 20 per cent — they have not moved,” Boucher said.

He said the highest income earners are benefitting twice, in that they also benefit from a decrease in the standard deduction.

At the same time, the PSU head said, middle and lower income workers are left with no change in their tax rates.

“…  and we think this is very unfair,” Boucher said.

“If you are going to engage in tax reform, do a comprehensive tax reform. If you want to stimulate the economy this way, then you need to find a way to give back to all workers in all categories, particularly the low-income earners. They are the ones who suffer the most, they are the ones who have to live, literally, from pay cheque to pay cheque.

“So we are calling on the minister of finance to review what you did in the 2018 Budget and look at some practical way that you can alleviate the financial burdens of the low-income workers of this country. If you are so concerned about the poor, find a way to give back to the poor because they are the ones who will spend, because they always have a need and therefore they would be stimulating the economy directly,” Boucher said.

He said that if the government is going to give a tax reduction with the view that doing so would stimulate the economy, the government should try to give it to those at the very low end of the spectrum.

“… they are likely to be the ones who are going to turn around and spend back what you give them. When you give to the high income earners, it is more than likely that they are just going to bank it,” he said.

Boucher said there are more than 400 public servants who have not benefitted from any adjustments.

“They are at the lowest end and as a union, we are really concerned about that. They have gotten nothing… So when you give the tax cuts and you leave a chunk of the public service, a chunk of workers out of it, it is of grave concern to us.”

He said that in 2002, the prime minister observed that Vincentians were among the highest taxed nation in the Organisation of Eastern Caribbean States.

Boucher told the media that the International Monetary Fund, through its Article IV consultation last year, came to the same conclusion.

“So, therefore, it is important that all workers be given a tax break, given the weight of taxation.

He said that in 2017, workers had to spend an extra 3 per cent to meet their needs.

“So we were looking for something tangible, particularly for those persons at the bottom,” he said.

One reply on “Latest tax reductions benefit richest the most — PSU”