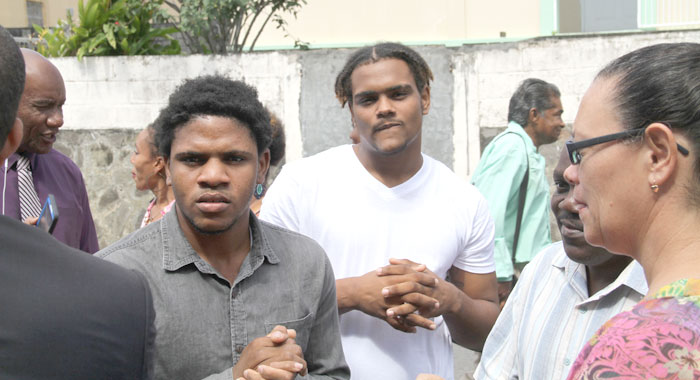 The two youths who baffled the Kingstown Magistrate’s Court with their burglary of a Kingstown business place has been given four-year jail terms suspended for 18 months.

Senior Magistrate Rickie Burnett handed down the sentence on Jerroy Phillips, 21, of Redemption Sharpes, and Anthony Hope, 16, of Belair, on Tuesday, after hearing submissions from lawyer Grant Connell and pastor Cecil Richards.

The sentence came one week after the men pleaded guilty to a charge that on Feb. 18, in Kingstown, without lawful excuse, they damaged three commercial glass and aluminium doors — value EC$1,245; one white HR Dome surveillance camera — value EC$750, one show window glass — value EC$700 and one iron gate — value EC$200, total value, EC$3,645, the property of St. Hill Insurance Ltd., intending to damage such property.

The men had also pleaded guilty to a charge that on the same date, also in Kingstown, they entered the St. Hill Insurance Ltd. building as trespassers with intent to commit an offence, to wit, theft.

Police arrested the men on the upper floor of the two-storey building when they responded to a report at 3 a.m. on the day in question.

They met the men with knapsacks containing tools — including a pig foot (crowbar) and screwdrivers, dark clothing, black gloves, black bandanas and other items.

The men were not represented when they appeared in court last week and pleaded guilty.

The court heard that they had both left school early, with Phillips, who was sending himself to Buccament Bay Secondary quitting in form 3 and becoming a fisherman after he had no one to represent him at the school’s parents’ day.

Hope’s parents took him out of West St. George Secondary last year after got into a fight in 2015.

In his submission on Tuesday, Connell  — who came into the case after the men had pleaded guilty — said that the court has almost replaced the church in helping to resolve issues.

He said it is good to see that the Christian Council “has come alive of late”, adding that he has, therefore, asked Richards, a cleric at the Kingstown Baptist church, to make submissions to the court.

The lawyer said that the church has been working on a programme specifically designed for young men like those before the court, adding that he has also spoken to the Anglican, Methodist, and Streams of Power churches, who are willing to help.

Connell said that Hope is an avid footballer and he (Connell) has spoken to coach and former national footballer Seymour “Rollit” Walrond, and former West Indies cricketer and fitness expert, Lindon James all of whom can contribute to rehabilitating the young man.

Connell said that imposing a custodial sentence would have a corrosive effect on the youth and his family, adding that the prison is not equipped to deal with such a young man.

The lawyer said that if sent to jail, the youth would be mingling with other persons like him and with other seasoned criminals.

“You will be opening him up to a university of crime and when he graduates in a couple years, he re-enters a society that can’t even deal with that now.”

Connell asked the court if it is minded to impose a custodial sentence that it be suspended and “hang over his head like an umbrella, shielding him from the elements of destruction. Only he can remove that umbrella and close it and subject himself to jail.”

He said that the prosecutor has made certain suggestions and must be commended for that.

Prosecutor Corporal Kenrick Williams had suggested, one week earlier, at the Feb. 20 arraignment, that the men be given a suspended sentence. Prosecutor Sergeant Cornelius Tittle has told the court that the men can be reformed through a custodial sentence.

Connell told the court that it cannot go unnoticed that both of the accused men suffered injuries, namely a fracture to the arm and a head wound.

The men had claimed that police beat them during their arrest.

“It is either we abide by the law that exists or we have vigilante justice,” the lawyer told the court.

“And the police, too, have to comply with that. Because if you go there and you see something going on, there is no law that allows you to start to beat. You restrain, arrest and bring before the court and you follow the law. So, in a sense, they have already succumbed to a sentence.”

He said that the youth have spent time on remand and have experienced the “horror” of incarceration and this will allow him to get back on the straight and narrow road.

He said Hope’s mother has indicated that they had been churchgoers but have stopped attending since they moved four years or so.

The lawyer submitted that though he believes the church is now somewhat dormant, right now, they should take their rightful place in society.

He said that Phillips, too, is not in “that quagmire”, where he cannot be brought back.

Sending him to prison for any number of years, even one, would have the same “corrosive effect”, Connell told the court, noting that none of the youths have any previous convictions, adding that at ages 16 and 21, they have been doing something right.

Meanwhile, Richards told the court that he has been outspoken in the media about the alternatives to incarceration and has lamented that it is because of lack of resources why people who are not imminent threats to society find themselves incarcerated.

Correction can take place on the outside once the requisite mobilisation takes place, the pastor told the court.

He said that a number of counsellors have come on board to provide the resources “to ensure that we are more reformative rather than punitive,” the Christian cleric said.

Richards said he did not know why both of the youth were before the court.

The magistrate then asked the prosecutor to recount the facts of the case.

Having heard the facts of the case, Richards told the court that he feels that there is significant value to society in reforming its members.

Richards said that while not trying to exonerate anyone, it is often a result of the society’s failure why some persons end up before the court and the society turns around and incarcerates them.

He said he believes that first-time offenders, particularly, can be far more beneficial to society in the long run if these matters are addressed from a social perspective.

He said the church believes that if these matters are handled properly, they can set the template for reform.

“I am not here for this young man, particularly, I am here for the society, for doing something right, something necessary, something that is redemptive and reformative for our society. That’s why I am here,” Richards said.

Having heard the submissions, the magistrate handed down the suspended sentences.