Lecturer who protested Gonsalves gets support from colleague 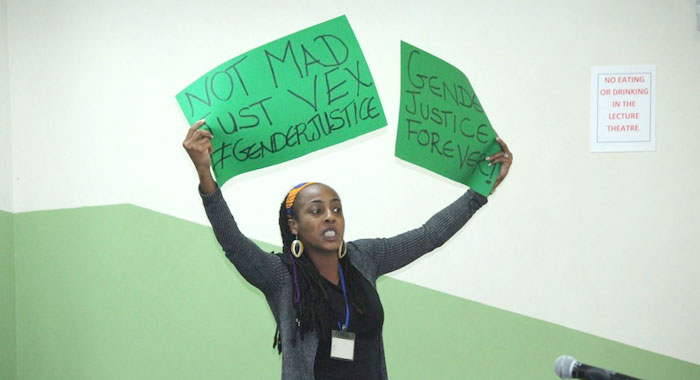 Lecturer in political science at the Cave Hill Campus, Dr. Kristina Hinds, holds up a placard during Gonsalves’ lecture in Barbados on Feb. 22. (Photo: Barbados TODAY)

The University of the West Indies (UWI) lecturer who led three other women in protest against Prime Minister Ralph Gonsalves at the Cave Hill Campus last month has received support from another lecturer.

In her column in Barbados TODAY newspaper last week, Barrow-Giles said that Hinds is passionate about gender issues and abuses of political power.

“We can circulate letters claiming to be the definite picture, painting the young lady as a villain and Gonsalves as a saint. We can choose to forget that the state has chosen to abuse a vulnerable and poor young woman,” she said.

Barrow-Giles said Hinds’ actions were not entered into lightly when she disrupted Gonsalves public lecture as a guest at the university.

The protesters there highlighted what they see as the Gonsalves’ government’s handling of the saga in which former model Yugge Farrell was charged on Jan. 4 with reportedly hurling an insult at Karen Duncan-Gonsalves, wife of Minister of Finance, Camillo Gonsalves.

Barrow-Giles said through their protest, Hinds and the three other women drew some much-needed attention to the ongoing silence and abuse meted out to women across the Caribbean.

She spoke of a situation in St. Lucia in which a minister of government still holds his ministerial post, whilst a young lady with whom he allegedly had an extramarital relationship has been charged with blackmail.

“As I have already said, that is the extent of the individual ministerial accountability that abounds around the Caribbean. I speak specifically to the issue of ‘amendatory responsibility’ and ‘sacrificial responsibility which ought to have seen, at a minimum, both ministers (Gonsalves and Raymond) apologizing to the parliament and resigning.

“So much of this is also bound up in the persistence of patriarchy and the subordination of women, and until patriarchy with all its ugly manifestation (including the open misogyny) is completely routed and dismantled, this treatment of women will continue. So perhaps yes, I can concede that the instrument could have been different, the four young ladies could have silently protested with their placards, but it certainly has widened the conversation and hopefully, just hopefully a “me too movement” will emerge in the Caribbean. Hopefully, yes hopefully, real change will come as we take a more critical look at those persons in whom we place our trust and our future.

“I, for one, will not judge the protesters, I applaud them for their stance and their bravery in the face of power and, in my view, a show of raw unwarranted force by the security apparatus of the state,” she said.

The prime minister has said that he was not embarrassed by the protest, saying that the lecturer was unable to get students to support her demonstration.

8 replies on “Lecturer who protested Gonsalves gets support from colleague”