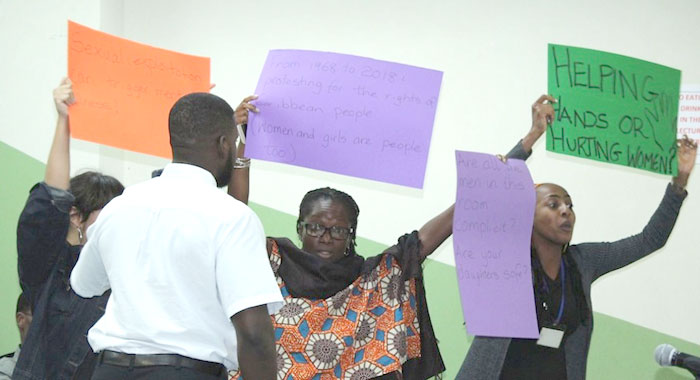 Protesters inside the lecture hall in Barbados. (Photo: Barbados TODAY)

Barbados media reports have identified the three women as Kristina Hinds, a lecturer — who holds a doctorate — in political science at the Cave Hill Campus, Public Relations Officer of the National Organisation for Women (NOW), Marsha Hinds, and Luci Hammans, a member of the Life in Leggings Movement.

The protest is said to have lasted for 10 minutes before security personnel escorted the women from the lecture hall.

A number of videos of segments of the protest have been circulated via social media.

“We do not like misuse of power or abuse of power, we will not show deference to politicians or prime ministers because we are in solidarity with our sisters and our brothers across the region,” one of the women shouted in the lecture hall, as the prime minister was at the podium.

“Thank you, sir, for encouraging us to have this solidarity; solidarity with our sisters across the region. Because women’s lives matter, too; not just black lives. We just don’t want to help with natural disasters. We want to help to ensure that our political system guarantees justice for all. Justice for all! Justice for all,” the woman said.

At this point, Gonsalves said:

“I wonder if my dear sisters, at some appropriate time—”

“This is appropriate,” the woman said.

“We have been bearing, sir,” the woman said.

“At some appropriate time, I am prepared to have a discussion with you, with all of those issues you have raised. I think they are important issues,” Gonsalves said.

“They are important issues that require addressing. Not silence. Not dignified silence.”

The woman’s mentioning of “dignified silence” was an apparent reference to the advice that the prime minister has given to his son, Minister of Finance, Camillo Gonsalves, amidst the scandal that broke on Jan. 5, when Yugge Farrell was charged with using abusive language at Camillo’s wife, Karen Duncan-Gonsalves.

Farrell, 23, who later claimed that she had a years-long relationship with the finance minister, who is twice her age, spent most of January in court-ordered psychiatric evaluation.

The prosecution did not give the court any information to support its application that Farrell be sent to the psychiatric hospital.

However, it was later revealed that she had been treated for mental health issues in the past.

He treatment at the hands of the court has triggered widely local and regional outrage.

“I will not be silenced… Justice for women— This is the way we will be heard because it is the only way women are going to get heard on this issue in Barbados, in St. Vincent, in any part of the world. Not just me too, we too,” she further said in an apparent reference to the Me Too movement.

The “Me Too” movement (or “#MeToo) spread virally in October 2017 as a hashtag used on social media to help demonstrate the widespread prevalence of sexual assault and harassment, especially in the workplace

Gonsalves said that his invitation “to my dear sisters stands.

“My invitation stands. I will be very pleased to discuss it — all the issues which you have raised at any time which you consider to be reasonable in all the circumstances.”

“This is a reasonable time though,” the woman said. “This is a time for conversation.”

“But we are having a conversation on natural disasters now,” Gonsalves said, triggering laughter and applause.

As Gonsalves again begin to speak, the woman said, “It is uncomfortable, I know.”

“Uncomfortable for whom? Me?” the prime minister responded.

“Protest is legitimate…” the woman said in an apparent reference to the comment by the man who continued speaking about having come to hear the prime minister.

“Justice for all! Thank you for gracing us with your presence so that we can do this,” she said before leaving.

The prime minister was in Barbados to deliver a public lecture at the University of the West Indies.

He spoke on the topic, “Helping Hands or Damaging Hands — the Effect of International Relief on CARICOM Small Island Developing States.”

9 replies on “UWI lecturer protests against Gonsalves in Barbados”