The appropriate time and place for justice 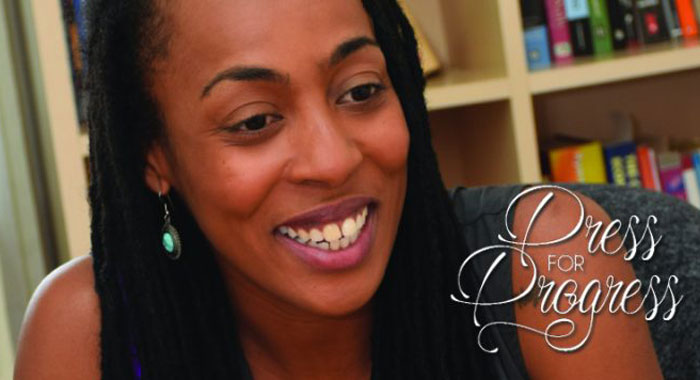 Dr. Kristina Hinds is a lecturer in political science and international relations at the University of the West Indies, Cave Hill Campus. (Photo: Barbados TODAY)

(Dr. Kristina Hinds is a lecturer in political science and international relations at the University of the West Indies, Cave Hill Campus.)

On 22 February 2018, three women interrupted a public lecture at the University of the West Indies (UWI), Cave Hill Campus. The public lecture was on the subject of natural disasters in the Caribbean and it was being delivered by the Prime Minister of St. Vincent and the Grenadines, Dr. Ralph Gonsalves. The three women raised placards and their voices in solidarity with women in the region. They asked for justice for women and for all. They asked that allegations of misuse of power be addressed. I was one of the women. We were just three bodies but we hoped to embody more than our numbers. Others joined us outside of the lecture theatre, after we were ejected from the proceedings. Some of these people may not wish to be identified for reasons that are understandable in this small Caribbean space. Notable among those who stood with us is my colleague Dr. Aaron Kamugisha, who questioned Dr. Gonsalves on gender justice during the question and answer segment of the lecture. Even as a small group of protesters, we were eventually confronted outside of the lecture theatre by seven police officers, three of whom were armed with rifles. We were confronted because we, the three noisy women, continued to be disruptive by raising our voices. Dr. Gonsalves also informed us that he would be willing to discuss these issues “at an appropriate time”. Yet, this protest was about bringing attention to improprieties. Now is the time.

I felt moved to act when I saw an advertisement for this lecture on 21 February 2018. I felt uneasy about yet another lecture being delivered at the Cave Hill Campus by Dr. Gonsalves. This forum would serve, once again, to affirm this leader’s significance to the region. I questioned whether we should sit quietly by and listen to one of the region’s leaders provide learned perspectives when allegations of sexual assault and rape have been levelled against him over the last decade. Now, Dr. Gonsalves has never been found guilty of any of these accusations, nor has he been tried for them in a court of law. So, it is unfair, I have been told, to treat an innocent man as guilty. This is true. There are many people who have been wrongly accused and wrongly imprisoned. However, allegations of rape and sexual assault are not peripheral issues to be set to one side. These are serious violations that must be treated as such, whether raised against “ordinary” people or against so-called political giants.

Women find it difficult to report violations of a sexual nature because they feel a sense of shame or guilt. Women may fear that they will not be believed or that they will be judged by their past sexual activities or for their manner of dress. Women fear that they will not be treated with care and compassion when they report rape, sexual assault or sexual harassment to the authorities. Women can be “slut shamed” and called “crazy”. Women may feel fear, apprehension and may be sceptical about their ability to receive justice. Women face these hurdles even when their accusations are levelled against “ordinary” people. Imagine, then, how difficult it must be to come forward with allegations against the most politically powerful person in a country. Consider how difficult it must be to inform police officers that you wish to report that the Prime Minister has committed a crime against you. Imagine how difficult it also must be when your case is not heard, rather, when your case is dismissed by the State, the same State that the Prime Minister plays a critical role in organising.

Consider also that rape and sexual assault have a long and painful legacy in the Caribbean colonial past. Enslaved women were raped and assaulted with no recourse to justice. This was a part of the experience of being property to be disposed of as those with more power saw fit. In the struggle for reparations, of which Dr. Gonsalves is one of the region’s leading advocates, these injustices feature among those for which Caribbean people seek redress. Slavery, indenture and the entire colonial experience were painful exercises in the use of power to deny human dignity. One of the problems that the current day movement for reparations faces is that our leaders have waited too long to prioritise it. Our leaders waited for some appropriate time to seek justice but are now being told that colonization and slavery are so long past that now is not the appropriate time to seek such justice. If we are to meaningfully seek repair for historical violations of our collective humanity, violations for which no court of law has found anyone guilty, we must address similar violations of our humanity when they are raised in the present. If we are to meaningfully make claims about the significance of justice for the Caribbean, we cannot do it in ways that completely sideline gender-based injustices within our societies. We must pay particular attention when such charges are made against those who are entrusted with political office.

What made this lecture at the UWI all the more concerning, perhaps even inappropriate, was that it was occurring roughly one month after a very troubling case began to come to the attention of the Caribbean public. The case involved a young woman named Yugge Farrell who was confined to a mental health facility in St. Vincent and the Grenadines while awaiting trial for allegedly using abusive language to Dr. Gonsalves’ daughter-in-law. Whether Yugge Farrell suffers from mental illness or was involved in an intimate relationship with Camillo Gonsalves, Dr. Gonsalves’ son and the Minister of Finance in St. Vincent and the Grenadines, are not the issues here. Ms Farrell’s guilt or her innocence is also not the issue here. The issue is whether the treatment meted out to Ms Farrell was influenced by the fact that the case involved members of the Gonsalves family. That a prominent attorney felt compelled to travel from Barbados to take up her defence, raises questions about the extent to which the judicial system in a small Caribbean country could deliver a fair outcome without this kind of pressure. This issue should cause us to reflect on how the exercise of political power can harm ordinary people in our small societies. That the Prime Minister of St. Vincent and the Grenadines would provide public comment on the Farrell case in ways that imply that Ms Farrell is guilty or that she is crazy, is highly inappropriate and should cause us to be concerned too. Such comments by a Prime Minister can be construed as potentially prejudicial to the legal proceedings and are also damaging to this young woman’s character.

So, on 22 February, 2018, I stood in protest alongside two other willing women, Marsha Hinds and Luci Hammans. In the days after this event, I received emails and other messages of support from women and men from across the region. I received messages from friends, acquaintances and strangers. Some of these people revealed their painful experiences of rape, assault and harassment in St. Vincent and the Grenadines and elsewhere. They shared the trauma that they, their friends or their relatives have experienced. These messages made me acutely conscious that solidarity could be meaningful even if only offered in a modest protest. In the wake of this protest, media reports indicated that Dr. Gonsalves labelled our actions as hysteria fuelled and based on misunderstanding of “the facts”. This leader is also reported to have stated that “the facts” show that the person who was wronged in this Yugge Farrell affair was his daughter-in-law, Karen Duncan-Gonsalves. One wonders whether it is appropriate for a Prime Minister to pronounce a young Vincentian woman guilty, in the absence of a ruling from the court.

The heavy-handed police response in Barbados and the comments that Dr. Gonsalves offered in response to this protest, and about the Farrell case, can teach much about the exercise of power. Just as I have become more aware of the power of solidarity, I have also become aware of the reality of intimidation. I have become aware of how easy it is to face both overt and veiled threats. Even as a well-educated middle-class professional woman, a PhD holding university lecturer, I can easily be converted into an irrational woman, one swayed by media hysteria, a misguided and unintellectual rebel without a cause. How easy might it be then, to discredit “ordinary” people such as working-class women or young models? Whether you are a police officer, a human rights lawyer, or the average person on the street, you can be made to feel the weight of power bearing down on you to affect your silence. So, a handful of people protested at what the status quo would define as an inappropriate time, in an inappropriate place and in an inappropriate way. We were there, and we protested because standing up against practices that oppress, violate and silence us as Caribbean women, as Caribbean people and as human beings, must take priority over conveniently employed notions of propriety.

5 replies on “The appropriate time and place for justice”