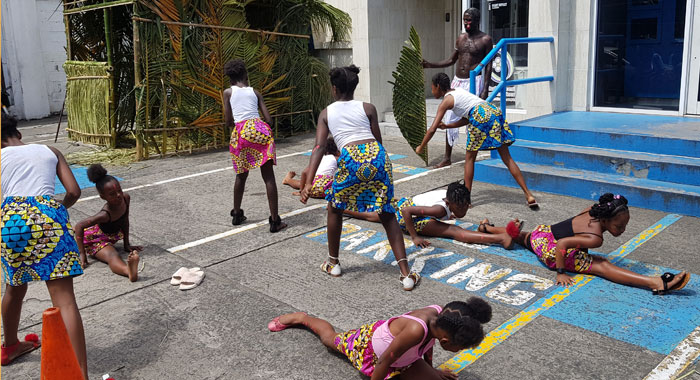 A Garifuna group from Fancy performing at the event.

In an effort to raise awareness for the preservation of indigenous Vincentian culture, telecommunications provider, Flow is reveling in the success of its first Garifuna concert.

As part of efforts to commemorate National Heroes Day, celebrated on Wednesday, Flow held a small Garifuna concert that saw many persons flocking the Flow promenade on Tuesday to witness performances from members of Garifuna groups from Greiggs and Fancy.

The audience was entertained by the two cultural groups, which performed dances, dramas, choral speeches and jovial skits, which all paid homage to Vincentian culture.

Flow’s Marketing and Communications Lead, Nikala Williams, said her company team felt it necessary to bring Garifuna culture to capital city, Kingstown as a way of raising awareness about the Greiggs and Fancy Heroes Day celebrations.

Williams noted that the concert was the first of its kind for Flow. She further highlighted that the Flow team already has plans to develop next year’s concert with even more Garifuna entertainment for its many patrons and even hinted at the possibility of the inclusion of a Garifuna food court.

Williams highlighted that the celebrations were also portrayed internally, as many members of staff participated in a cultural wear competition that was met with much enthusiasm.

Stressing on the significance of playing a heavy hand in preserving Vincentian culture, Williams stated that Flow has been supporting the Greiggs and Fancy Garifuna and Heritage festivals for over five years.

She said the company intends to continue that support, as it is one of the ways that Flow ensures growth and development of Vincentian culture.