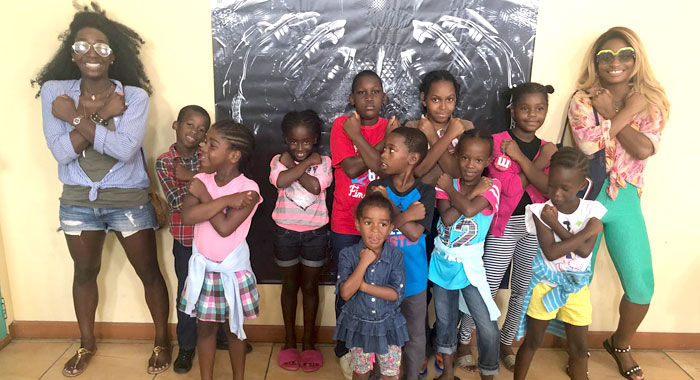 It was an evening to remember for the children of Rose Place (Bottom Town), Kingstown on March 7, as they were treated to a trip to Russell’s Cinema to see the blockbuster film, Black Panther.

A dozen children from the community joined in the movie fun and enjoyed an evening watching the biggest film of the year, complete with the customary popcorn.

The event was organised by the Cicada Foundation, a charitable group founded by designer and performer Eniye Kagbala and Digicel Manager, John Davies.

“We set up The Cicada Foundation as a charity to empower all communities across St. Vincent and the Grenadines and to enable individuals, especially children, to be at their best and give their best. What better way for the children to discover their own creativity and inner spirit than to immerse themselves in the fabulous world of Wakanda,” Kagbala said.

Davies said: “It’s small acts like these that can really turn into significant steps. The Cicada Foundation will continue to bring opportunities to communities and individuals who wish to express themselves and unleash their potential.”

Keneisha Gordon was the community ambassador who worked along with The Cicada Foundation to organise the event. Marie Raphaelle Mona Jean also supported the event, through a generous donation.

Black Panther continues its success around the world. Critics consider it as one of the best films set in the Marvel Cinematic Universe and have noted its cultural significance. It has grossed over US$926 million worldwide, making it the highest-grossing film of 2018, as well as the ninth-highest grossing film ever in the United States and 45th highest of all-time.