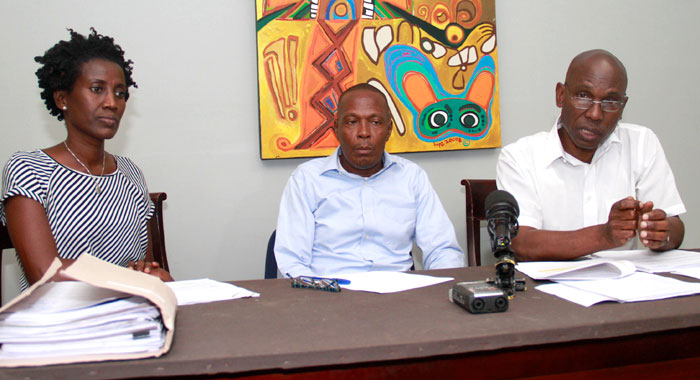 Counsel for dismissed public servant Otto Sam say they hope that when they return to court tomorrow (Thursday), the government would say that it is ready to honour the two years-old court orders for compensation related to his transfer and subsequent dismissal.

“… when we look at what has happened, it’s eight years. And eight years is too long. It is much, much too long,” lawyer Jomo Thomas told a press conference in Kingstown on Tuesday at the chambers of Thomas and Barnwell, where Sherlan “Zita” Barnwell is also a partner.

“Mr. Sam is still trying to pay all of the monies that he had borrowed, the arrears his mortgage had gone into, the fact that he has lost his health and medical insurance. All of those things should not be happening and we hope that when we go to court on Thursday, we would have a posture from the state which says enough is enough and here’s the cheque that amounts to the outstanding balance which is owed to Mr. Sam,” Thomas said.

Thomas said that the state has failed to comply with two orders of the court regarding paying awards for claim 399 of 2010 and claim 247 of 2014, which Sam successfully brought against the State.

Claim 399 of 2010 concerns Sam’s Aug. 23, 2010 transfer from his post of head teacher at the South Rivers Methodist School to the National Emergency Management Organisation, where he was not assigned to any post.

Sam sued the government and the court ruled that his transfer was illegal, irrational and that he is entitled to an award.

To date Sam has not been paid this sum plus interest, his lawyers said.

Claim 247 of 2014 concerns the decision by the Public Service Board of Appeal to dismiss Sam from the civil service.

On Oct. 20, 2016, the court found that the decision to dismiss Sam was illogical, unreasonable, unlawful and arrived at in an unfair and procedurally improper manner and disproportionate.

The court further ruled that Sam was unfairly and wrongfully dismissed.

Pending the assessment of general damages, the court ordered the State to pay Sam the portion of his salary that was deducted during his interdiction between Aug. 7, 2012 and May 15, 2013.

The court also ordered the government to pay Sam his full pay, all increases and benefits that accrued to him and which are due and payable to him in his capacity as head teacher, benefits from the date of his dismissal on May15, 2013, including his pension and gratuity.

Barnwell noted that assessment was done in 2015, judgement given in 2016 and now, in 2018, Sam is still waiting for payment in the dismissal matter.

“Since then, we have had several discussions with the attorney general, either face to face or by telephone inquiring about the payment as to the first award, the $64,000 and we have been given promises, but promises to no end and no payment.”

She said that her chambers were told to wait until after the 2018 Budget — which Parliament approved on Feb. 6, 2018.

“The question that we ask all the time when we discuss this is what is keeping the state from making that payment from that first judgement. It is unbelievable.

“The state must show that it is a role model in terms of what it expects citizens to do. When citizens take each other to court and one wins an award … in a civil matter, the court expects the defendant to pay the claimant…” Barnwell said, citing the finding of the Privy Council in the case of Gairy versus the Attorney General of Grenada.

Thomas had noted that in that case, the London-based Privy Council — which is the highest court in St. Vincent and the Grenadines for these types of matters — had said:

“No legal or political system today can place the State above the law as it is unjust and unfair for a citizen to be deprived of his property illegally by negligent act of officers of the State without any remedy . . . The modern social thinking of progressive societies and the judicial approach is to do away with archaic State protection and place the State or the Government at par with any other juristic legal entity.”

Barnwell said that a claimant has certain recourse in terms of trying to ensure the execution of the award, but noted that the Crown Proceedings Act prevents a citizen from taking the normal route in terms of execution of an award.

“But as he (Thomas) says, you can actually do it by asking for a mandatory order for the Minister of Finance to pay.”

Barnwell said that persons might ask why doesn’t Sam take that route.

“The point is why is the state not honouring its obligation to pay. And why must Mr. Sam incur that expense again to take the state through another legal hurdle just for it to pay. I mean that should be embarrassing enough for the state, and, as we say, if you talk about being a progressive government, then being progressive means that after you have wronged a citizen that you should actually make good on your obligation by law.”

On Thursday, the 2014 case comes to court and what is being assessed is damages for his wrongful dismissal.

Thomas said that the situation continues for more than a year after the court refused an application by the government to stay the execution of the judgement.

“It is frightening, scary that when the court orders the state and the state simply disregards it. That contempt and the whole violation, it is sort of scary because it is saying that the state can do us anything as citizens,” Sam said.