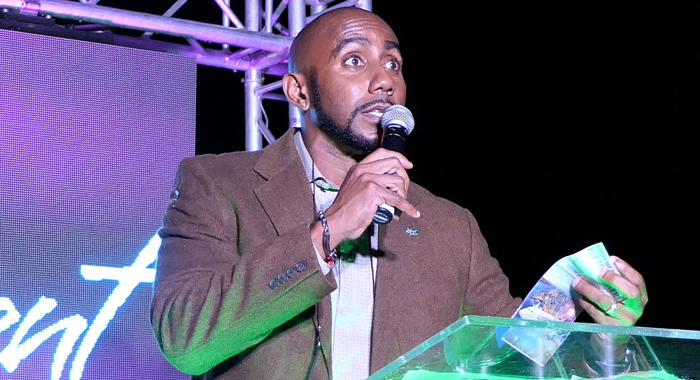 Head of the Tourism Authority, Glen Beache, used the Feb. 26 launch in St. Vincent of Caribbean Airlines JFK-Argyle flights to berate an absent “member of the media” who he said stayed away from the event because it was too positive.

However, when contacted by telephone on Wednesday, the former tourism minister, refused to tell iWitness News which media houses were invited to the event, which was held at a hotel.

“That’s not anybody’s business,” said Beache, who heads the Tourism Authority, which is financed by millions of taxpayers’ dollars annually.

“Are you in a position to say whether Kenton Chance or iWitness News was invited?” Beache was asked.

“Is there something I can help you — specifically,” he responded to iWitness News.

“Well, actually, this is for media purposes,” Beache was then told during the telephone call that began with Chance identifying himself and saying he was calling on behalf of iWitness News.

“Okay. Well you have a good afternoon,” Beache said and ended the call.

(Listen to the audio below)

Some media workers who attended the event have expressed their displeasure with the comments that Beache made at the launch event, in light of their suspicions that some media houses were not invited.

iWitness News did not receive an invitation to the event at which Beache made the comment and among the media houses that did not attend was the state-owned National Broadcasting Corporation.

iWitness News is often not invited to press conferences held by the Tourism Authority and the Ministry of Tourism and some state agencies, notwithstanding our repeated requests to be invited for news coverage purposes.

At the Feb. 26 event to launch the CAL flight, Beache said he wanted to challenge the Vincentian diaspora in New York to match their counterparts in Canada.

He told the event that there has been a 90 to 91 per cent load factor since Air Canada Rouge began making weekly non-stop flights between Toronto and Argyle on Dec. 14.

“And a large part of that has to do with the diaspora. It is a mixture of the diaspora and the leisure traveller. And I want to send out a challenge to the American diaspora because a lot of them have had a lot to say and I want to make sure that CAL has that sort of load factor, if not higher, when they fly into St. Vincent and the Grenadines on a weekly basis. So I hope the media carries (sic) this back,” Beache told the gathering, according to a recording of the event obtained by iWitness News.

“I notice there is one member of the media that’s not here but I am guessing it is because it is too much good news that this doesn’t suit their sort of writing, so I excuse them for not being here, it is too positive for them,” Beache said to some cheering.

“So I send out that challenge, though, to the diaspora in the United States let us see if we can better Air Canada with Caribbean airlines and have a good competition between the Canadian diaspora and the American diaspora,” Beache said.

In an effort to find out what media house Beache might have been referring to, iWitness News contacted the Tourism Authority on Friday, and Executive Assistant Annie Peters said that the information was confidential.

Asked if she could say whether iWitness News was invited, she said she would not be able to give that information over the phone because of her inability to verify that Chance was invited.

Peters said the information about which media houses were invited could be obtained from Beache.

As he introduced the finance minister Camillo Gonsalves at the event, Beache said:

“… and I know that as the new Minister of Finance, that he promises to give the SVGTA all of its budget this year. And I love him for it and I thank him for that”.

Last April, Beache complained to Vincentians in Canada about the size of the tourism budget in St. Vincent and the Grenadines relative to that of other Caribbean countries.

Opposition lawmakers have also noted that the Tourism Authority has not been receiving, over the past few years, the full amount approved for them in the budget.

In his response to Beache’s comments at the event, Gonsalves, who became Minister of Finance last November, said, seemingly light-heartedly, “… as Minister of Finance, I think I would introduce a performance-based pay to the Tourism Authority.”

“No problem at all,” said Beache, whose pay package is said to be larger than that of the minister of tourism.

“So you would be paid up to the amount that you can deliver for the people of St. Vincent and the Grenadines,” Gonsalves said.

Beache has regarded as negative reporting the mention of a number of facts that he finds inconvenient.

Among this is the fact that taxpayers were left with a bill for EC$692,954 after the Tourism Authority chartered a number of flights to land at Argyle International Airports to mark the Feb. 14 opening of the facility, six years behind schedule and at almost twice the estimated cost.

Beache had expressed confidence that the chartered flights from Canada and New York would have sold out within one hour of tickets going on sale.

However, the government spent EC$986,775 for the chartered flights but only generated EC$293,803 in ticket sales.

Also, Beache has frowned upon the media’s reportage on the fact that he failed after years of negotiation to get a single international carrier to commit to regularly scheduled flights to the airport when it opened on Feb. 14, 2017.

Beache seems to prefer the type of reportage that says that an airline has committed to fly to the airport without any context about whether the government is subsidizing the flights and at what cost to the public purse.

Last week, Gonsalves, who is also Minister of Information, said that public servants should adopt the mindset that data collected by the state belong to the people and should be shared with the public, as a matter of policy.