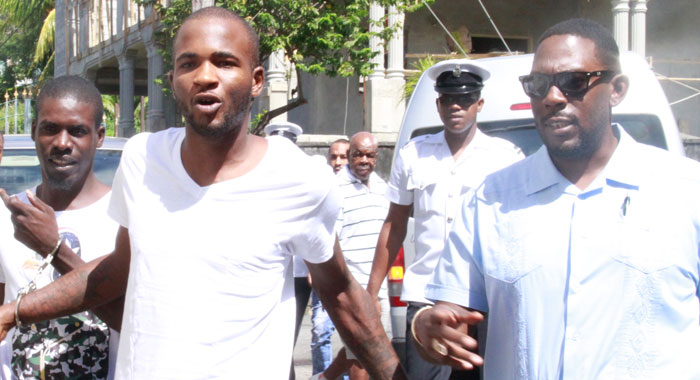 The Redemption Sharpes man who was, on Monday, slapped with one charge of murder and six counts of attempted murder has been remanded into custody while his two co-accused in a conspiracy to murder charge have been granted bail.

Mwata Henry will return to court on June 25, 2018 for a preliminary inquiry into the murder of fellow villager, Jahbary Charles, 31.

Charles died on Jan. 24, 2018 after being shot about 8:30 p.m. in the chest in Redemption Sharpes as he and friends celebrated his 31st birthday.

Four of the virtual complainants in the attempted murder matters received gunshot injuries in the same incident in which Charles was shot and killed.

The charges were read to Henry at the Serious Offences Court in Kingstown on Tuesday.

During the court hearing, Senior Prosecutor Adolphus Delplesche told Chief Magistrate Rechanne Browne Matthias that the Crown was no longer objecting to bail for a 15-year-old student and Dwayne “Sniper” Stevens, 28, both of Redemption Sharpes who, along with Henry were jointly charged with conspiracy to murder 25-year-old Collrise “Quinn” Pompey.

Pompey, was shot and killed in his hometown, Redemption Sharpes, on March 2 at 8:30 a.m.

The indictment is that between Feb. 28 and March 2, 2018 at Redemption Sharpes, they did agree with others that a course of conduct shall be pursued which, if the agreement was carried out in accordance with their intention, would amount to the commission of murder on Collrise Pompey of Redemption Sharpes.

Delplesche told the court that should bail be granted to Roberts and the 15-year-odl accused, the Crown would ask for sufficient surety, and for the accused to surrender their travel documents.

He asked that the court order that stop notices be placed at ports of entry and exit, that a curfew be imposed, that the men report to police at least twice per week and that they have no contact with the virtual complainants.

Browne-Matthias also ordered the men to report to the Central Police Station in Kingstown any three days of the week between 6 a.m. and 6 p.m., in addition to the other bail conditions requested by the prosecution.

The preliminary inquiry into the conspiracy to murder charge is slated to begin on June 13, 2018.

However, Henry will return to court before then, as he will be tried at the Kingstown Magistrate’s court next Tuesday, March 27 on an assault charge.

Henry has been charged that he assaulted Javid Alexander, 24, self-employed of Gibson Conner “by pointing a gun at his head” with intent to commit an offence, to wit “wounding” at Redemption Sharpes on Feb. 17, about 8:40 a.m.

He will reappear before the chief magistrate on April 6, 2018 for preliminary inquiry into yet another murder charge.

He is charged that on Feb. 22, about 7:25 a.m., with intent to commit an offence, to wit “murder”, on Rayshawn Gibson, 23, unemployed of Redemption Sharpes, he shot Gibson on his left hand with a gun” at Redemption Sharpes.