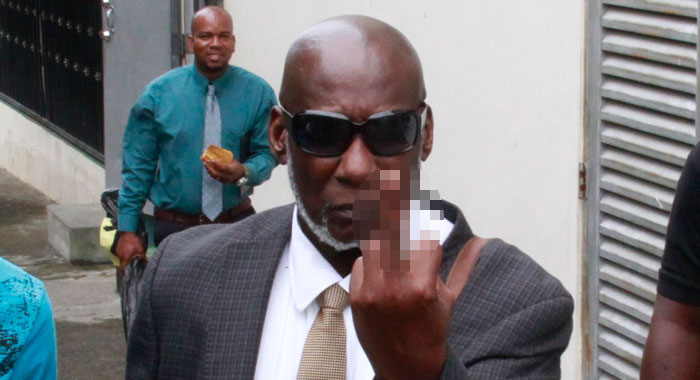 Allie Franklyn-Providence flips reproters off outside of the Serious Offences Court after his conviction on Monday. (iWN photo)

The Vincentian-Canadian man charged in connection with his failure to pay EC$15,000 in lodging and restaurant bills at Mariners Inn will be sentenced on Wednesday at the Serious Offences Court in Kingstown.

On Monday, Chief Magistrate Rechanne Browne-Matthias found the accused man, Allie Franklyn-Providence, guilty of a charge that between Sept. 29 and Nov. 4, 2017, at Villa, with intent to make permanent default on part of an existing liability to make payment of EC$15,494.22, he dishonestly induced Crystal Andrews of Villa to wait for payment.

The man racked up the bill in room and tax charges as well as 60 visits to the hotel’s restaurant.

The trial, which had seen several adjournments since Franklyn-Providence’s arraignment on Nov. 13, 2017, was conducted on a day that the court rejected the defendant’s application for an adjournment so he could seek a different lawyer.

In making her decision, the chief magistrate had noted that two months before Grant Connell withdrew as the man’s lawyer, he had signalled to the court his intention to do so.

The defendant, who had been granted bail, was brought to court on a bench warrant after failing to turn up for the scheduled hearing last week Thursday.

He told the court that he had been confused about the date of the hearing.

But the magistrate noted that counsel Connell had turned up to court last Thursday and had indicated that he was no longer representing Franklyn.

Monday’s trial included much drama, with the defendant repeatedly saying that he is not a lawyer, even as he argued with the court about how a trial should be conducted and quoted legislation that he said does not exist in St. Vincent.

He further told the court that he does not deny owing the money to the hotel but claimed that the establishment had refused to process his credit card, which according to the evidence adduced in court, did not have enough credit available to settle the bill.

Five months after his arraignment, Franklyn-Providence is yet to settle the bill.

He told the court that the case against him had nothing to do with the bill but was brought because the owner of the hotel, Vidal Browne, who he said he has had a business relationship with for 30 years, was not pleased with his efforts to acquire Young Island.

During the trial, Senior Prosecutor Adolphus Delplesche, who presented the Crown’s case, repeatedly rose to ask the defendant to address defence witness Crystal Findlay-Andrews by her last name, “Andrews”, and preferred title, “Mrs”, rather that her first name.

But Franklyn-Providence repeatedly called the witness “Crystal”, before correcting himself, saying, “Madame Andrews”.

Promise but no payments

Andrews presented the most comprehensive account of the Crown’s case, saying that a reservation was made for Franklyn-Providence to stay at the hotel from Sept. 24 to Oct. 10 at a rate of EC$365.94 per night.

He was referred from Young Island Resort.

Franklyn-Providence checked into the hotel on Sept. 24 and the hotel took his credit card details to settle his bill.

On Oct. 10, he called the front desk asking for an extension of his stay and instructed Findlay-Andrews, the Team Leader of Marina’s Front Desk Team, to process a payment of US$1,000 from the credit card.

The transaction was successful and Franklyn-Providence extended his stay until Oct. 27.

On Oct. 22, Findlay-Andrews contacted Franklyn-Providence regarding bringing his account up to date because long-staying guests would, at anytime, be asked to do so.

At that point, Franklyn-Providence told Findlay-Andrews that he had no funds on his credit card and that he would have to send a cheque via FedEx to Canada as he does banking with Royal, which does not operate in St. Vincent.

But the man repeatedly failed to settle his accounts after making numerous promises to do so — and even after a number of meetings with the owner of the hotel.

On Nov. 3, sometime after the 3 p.m. deadline Franklyn-Providence was given to settle the then-EC$15,148.61 bill, he called the hotel’s front desk and authorised them to take EC$500 from his credit card.

One day later, he requested to meet with the owner of the hotel, saying he wanted to make payments in instalments and that he would settle the balance when he returns to Canada.

The two met on Oct. 5 and after the meeting, Brown informed his staff that Franklyn-Providence was unable to settle his bill and would no longer have access to his room and could not collect his belongings.

On Nov. 7, Franklyn-Andrews contacted the Calliaqua Police Station and sought their assistance in itemising Franklyn-Providence’s belongings, which was done in the presence of a justice of the peace and later sent to the Calliaqua police station.

Franklyn-Providence was later arrested and charged.

Two other members of the hotel’s front desk staff and investigator Detective Constable Joel Williams testified on behalf of the Crown.

Williams told the court when he interviewed Franklyn-Providence at the Calliaqua Police Station, where the accused man, on advice of his then lawyer, Andreas Coombs, declined to give the police a written statement.

He, however, gave a verbal statement to the police saying he was not denying owing the hotel but would settle the bill after selling his “products”, which he had told hotel staff he had planned to launch in St. Vincent and the Grenadines.

Under cross-examination, the detective said that the defendant had said that he had no intention of leaving the hotel without settling his bill.

Franklyn-Providence did not call any witnesses to testify on his behalf.

In his rambling defence, he told the court that he found it amazing that the three members of the hotel’s staff had given strikingly similar evidence.

However, the chief magistrate told him that to her mind that was not contradiction but corroboration.

“Well, I am not conducting the prosecution’s case,” the magistrate said, adding that the prosecution would bring witnesses they think are necessary to make their case.

In his evidence in chief, Franklyn-Providence said he is originally from St. Vincent, but lives in Toronto, and ran an incubator company, that executed a consumer loyalty reward programme.

He said that he and his colleagues had gone to the Turks and Caicos Islands, Belize, and Guyana and St. Vincent and the Grenadines was their last call.

He told the court that his relationship with Browne goes back over 30 years, adding that the businessman only noticed Marina’s Inn over 30 years ago because of what he (Franklyn-Providence) and his wife was able to do with the property when he was the manager.

Franklyn-Providence said he has been coming to SVG for the last three years and has been staying at Young Island, during which time he has spent over EC$50,000 on accommodation

He, however, said that Young Island suffered damage due to Hurricane Irma and the manager there transferred him to Mariners Inn.

The defendant told the court that when he made his reservation with Mariners Inn, they requested a credit card and dinged [charged] it for the first night.

Franklyn-Providence said he has consulted for a number of years in the hotel space and knows it very well.

He told the court that while the Innkeepers Act does not exist in SVG, the reason why a card is dinged is to ensure that the guest has enough money on the card to settle the amount that would be due for the duration of the stay.

Franklyn-Providence said he gave permission from the inception for the card to be used to settle his bill.

The man told the court that the charge against him has nothing to do with Monday but because Browne was not pleased that he had tried to acquire Young Island.

“He is the head of the food chain on the island and we are a threat to him. There is much more I can say but I don’t want to compromise the partners,” Franklyn-Providence said.

During cross-examination by Senior Prosecutor Adolphus Delplesche, Franklyn-Providence admitted that he owes the money to Marina’s Inn.

Asked why he has not paid, he said he was not refusing to do so.

“Me nah ask yo’ dat. Me ask yo’, ‘Whey mek yo’ nah pay de people dem dem money?’” Delplesche said in the vernacular.

Franklyn-Providence said that the hotel refused to go to the credit card to get their payment.

He said he had money on the credit card then, but has closed it because he went to jail for 15 days after being charged and Browne had locked the doors one week before the settling date and he couldn’t transmit phone calls, or do anything.

“He shut my business down. When he had me arrested,” Franklyn-Providence said.

The sentencing was adjourned to Wednesday so that the court could verify whether Franklyn-Providence has any antecedents in Canada.

On Wednesday, Franklyn-Providence will be given a date for his trial on two other charges.

He is charged that on Aug. 21, 2017 at Villa, knowing that payment on the spot of US$320 for services done was required or expected, he dishonestly made off without making said payment.

He is also charged that on Aug. 21 at Villa, he stole two bath towels –US20, two hand towels — value US$10, and two washcloths — value US$4, total value, US$34, the property of Carlita Samuel of Belair.