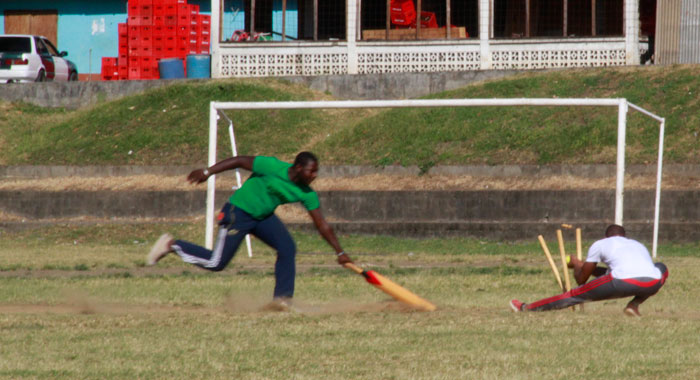 There was a lot of discussion after the umpires’ decision to give this batsman the benefit of the doubt. (iWN photo)

In an exciting match, the iWN-sponsored outfit completed a 9-wicket win over their opponents.

Batting first, Prisons stumbled to 63 all out.

Akeem Shallow was the biggest contributor to that amount, making 32 run.

Rohan Gibson was not out on 1 run.

Layne did the most damage with the ball, taking 5 wickets.

The I-Witness News Questelles Police Youth Club Cricket wasted no time in racing to 64 for 1 in 11.5 overs.

Dominic Thomas and Marcus John topped the scoreboard with 20 and 16.

Sylvan Louie, who was caught off the bowling of Winston Samuel on 6 runs, was the only wicket to fall for the iWN squad.

It was the first of three scheduled matches in the competition that the iWN team played.

Their opponents forfeited their first two matches, failing to turn up.

Team Manager, Detective Corporal Philbert Chambers says he will seek clarification from organisers of the competition regarding the team’s point standings so far.

Chambers was told that the youth club team’s game on the weekend was the first set of points that it had scored so far.

Organisers say that the two teams that forfeited their matches have been expelled from the competition.

Chamber is seeking information on why the iWN Police Youth Club team were not awarded the automatic point to which it was entitled after its opponents failed to turn up while his team did.

This is the second consecutive year that iWitness News is sponsoring the team. Last year, the team made it to the quarter-finals.