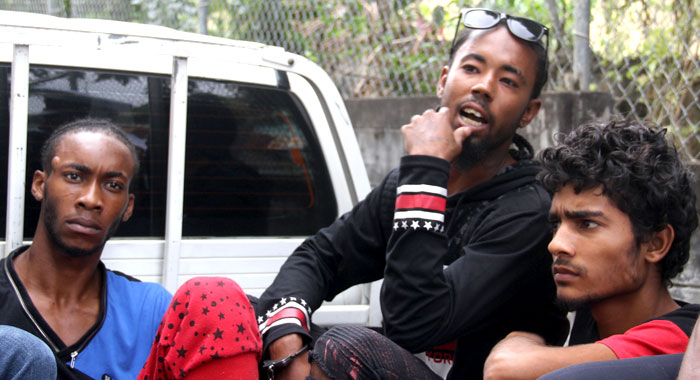 Three Dorsetshire Hill burglars have been remanded into custody for a few days to help them remember what they did with some stolen items — and thereby, possibly, avoid prison terms.

The men each pleaded guilty to the charge when they appeared before Senior Magistrate Rechanne Browne-Matthias at the Serious Offences Court in Kingstown on Wednesday.

The court heard that the Malcolms’ property is partially fenced and the Malcolms secured the house about 7:30 a.m., except a sliding door on the upper floor, which they usually leave open so that their dogs and cats can relieve themselves outside.

They returned to the house about 12:05 p.m. and noticed that everything was still in order.

However, when they returned home again about 2 p.m., they discovered that the house had been burglarised.

Detective Constable 831 Layne responded to a report and visited the house, where she discovered that a lock in a metal door on the southern side of the house had been dug out.

As a result of her investigation, one laptop was recovered from Fusion, a business place in Kingstown, and this led to defendant Clarke, who was taken into custody on March 25.

He admitted in writing to having burglarised the house.

Nicholas Peters of Redemption Sharpes was taken into custody and he took police to Keith Young in Campden Park, who handed over one black Lenovo laptop to the investigator.

Another laptop was recovered from one Andrews of Sharpes Village, Chateaubelair.

After further investigations, Layne went to Gill’s home in Dorsetshire Hill, where she recovered one of the stolen mag lights. Gill admitted to the offence.

Asked what they had to say for themselves, Clarke told the court what while he has a record for similar offences, he was released from prison over a year ago and is employed diving conch and lobster in Bequia.

He said that on the day in question, the two other accused invited him to go with them “on a scene”.

He apologised for his action and said that he would pay a fine if given time to do so.

Asked by the Chief Magistrate when he became sorry, he said he became remorseful when he and his co-accused “go pon de food”.

At this point, Senior Prosecutor Adolphus Delplesche rose and said, “How could somebody’s house, which is their castle, be referred to as ‘going on a food’? How could that be?”

The chief magistrate told Clarke that the “food” was “eaten” on March 1 and ask him when did he report his action — in light of his claim that he was sorry that he “ate the food”.

Meanwhile, Gill told the court that he was sorry for his actions.

He, however, noted that he cannot force anyone to do anything that they don’t want to.

Greaves also told the court that he was sorry and unhappy with the life he lives.

The chief magistrate said it was ironic that the eldest of the men who is also the only one with a criminal record was blaming his co-accused for his actions.

“You are very well versed in all kinds of manoeuvrings. Skilled, according to this booklet,” she told Clarke, referring to his criminal record.

“Your expertise is what contributed to this ‘food’ being successfully ‘eaten’,” she said.

Asked what are his submissions on sentencing, Delplesche told the court that the Crown thinks that Clarke should go to prison, given his record, and the two other men should be given suspended prison sentences.

“People must be able to leave and return and be happy and comfortable in their homes,” the prosecutor said.

“They say ‘going on a food’, and everybody laugh,” Delplesche said of the defendants.

“Well, my home ain’t no food. The eldest one is 23. Look at the ages of the others and they are calling your home ‘a food’. So they coming to eat you (homeowner) just now?” the prosecutor said.

During the sentencing hearing, the magistrate asked the men what they had done with the jewellery, and they said they had thrown them away because they were not real gold.

On hearing this, the magistrate told the men that she is remanding them into custody to give them time to “remember” where they threw the jewellery.

She noted that some of the jewellery is gold, while others are gold plated.

“They are not costume jewellery,” the magistrate said, adding that while she is inclined to consider the prosecution’s suggestion on sentencing, she might do otherwise if the stolen items are not recovered.

When the men were being taken from the precincts of the prison aboard a police vehicle, they were urged to help the police to recover the jewellery as this would help them at their sentencing.

Clarke said that since the end of the court proceedings, he had remembered something about the whereabouts of the jewellery.

The men return to court on Tuesday.