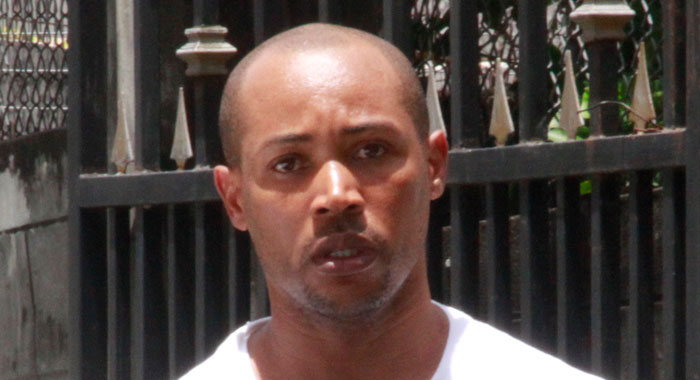 Emerson Delplesche is accused of conspiring, from behind prison walls, to murder his wife. (iWN photo)

A man awaiting a High Court trial for allegedly committing a crime against his wife has been charged with conspiring to murder her from behind prison walls.

When he appeared at the Serious Offences Court on Wednesday, Emerson Delplesche was read a charge that between May 31, 2017 and Feb. 4, 2018 at Her Majesty’s Prison in Kingstown, he did agree with others that a course of conduct shall be pursued, which, if the agreement was carried out in accordance with his intention, would have amounted to the commission of the offence of murder on Nadine Delplesche of Carapan by the parties to the agreement.

The charge was laid indictably and Delplesche was not required to plea.

An intruder shot Mrs. Delplesche, a secondary school teacher in the stomach, at her Carapan home about 1 p.m. on Feb. 4, 2018.

The 35-year-old woman was at home with her son doing house chores in her kitchen when the attack took place.

She was taken to the Stubbs Polyclinic where she was initially treated before being transferred to the Milton Cato Memorial Hospital (MCMH) in Kingstown, where she underwent emergency surgery and remains a patient.

Senior Prosecutor Adolphus Delplesche told the court that the issue of bail for the accused man would not arise since he is on remand in connection with another crime he reportedly committed against his wife.

“And we know when Duncan says three months, he does be ready in two. Duncan, you are good, you know,” Delplesche said to the detective.

“You’re real good.  There is no joke about that. When Duncan says three months, we get it in one and a half,” Delplesche said, adding that when another detective says one month, the files are presented in 40 days.

Meanwhile, the accused man told the court that he was making an application for full disclosure.

He further said he has tried to draw to the attention of the authorities that his family is at risk and is being threatened.

“If today or tomorrow either of my daughters get shot or my son or my mother, or wife — because I am not divorced as yet — the said virtual complainant has to get killed, I think the authorities should be responsible.

“I mention to an officer I owe people their money and people need their money. Since then, a lot of threats have been going on,” the man said.

“Well, make sure you not responsible for no threat. That all that this court is telling you,” the chief magistrate said.

“And this court is putting it before you to guide you. Make sure you are not responsible for any threats,” the magistrate further stated.

The preliminary inquiry in the matter has been set for June 26, 2018.

8 replies on “Man charged with conspiracy to murder wife”