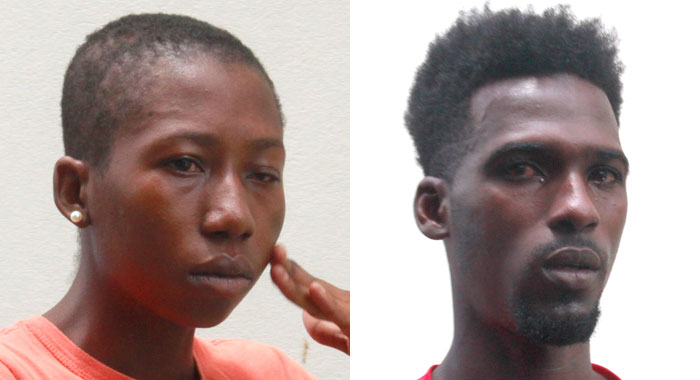 Tricia Horne, left, and a teary-eyed co-accused, Deran Franklyn outside teh Serious Offences Court after their arraignment on Tuesday. (iWN photo)

A woman and a man on gun and ammunition possession charges return to court next Monday, when the man will be sentenced and the prosecution would say whether they would proceed against the woman.

On Tuesday, Deran Franklyn told the Serious Offences Court in Kingstown that he is guilty of charges that on March 30 at Spring Village, Georgetown, he had, in his possession, a .38 revolver, three rounds of .38 ammunition, and two rounds of .32 ammunition, without a licence.

His co-accused, Tricia Horne, pleaded not guilty to all three charges.

Franklyn further pleaded guilty to a charge that on March 31, also at Spring Village, Georgetown, he unlawfully discharged a firearm at Alaska Humphrey of Georgetown.

He, however, pleaded not guilty to a charge that on March 9, 2018, at Spring Village, Georgetown, he unlawfully and maliciously wounded villager Sam Douglas.

Senior Prosecutor Adolphus Delplesche told the court that the Crown needed some time to consider the facts of the case to determine whether to proceed against Horne.

The wounding charge against Franklyn was adjourned and transferred to the Georgetown Magistrate’s Court for trial on April 16.

Franklyn was remanded into custody until his sentencing next week Monday, April 9.

Chief Magistrate Rechanne Browne-Matthias denied him bail in relation to the matter for which he pleaded not guilty.

She was ordered to report to the Georgetown Police Station on Fridays between 6 a.m. and 6 p.m., surrender her travel documents, and seek the permission of the court to leave the state.

Stop notices were also ordered placed at ports of entry and exit.