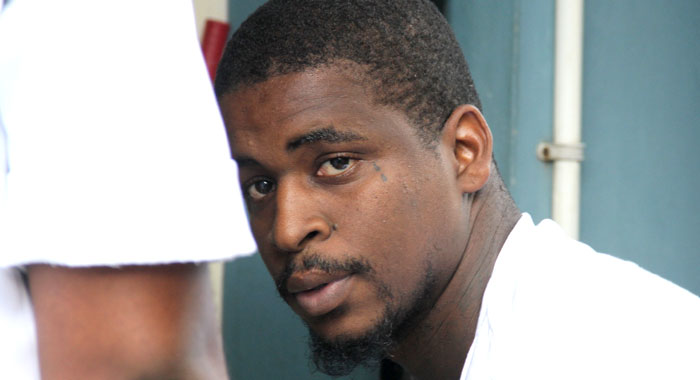 Kishorn Jackson has been charged with two counts of attempted murder and one count of conspiracy to commit robbery, in connection with the robbery. (iWN photo)

The Rockies man charged with two counts of attempted murder and one count of conspiracy to commit robbery in Kingstown on March 15 has been granted bail.

Senior Prosecutor Adolphus Delplesche told the court that the Crown was no longer objecting to the man’s bail since the two persons he is accused of shooting have been discharged from hospital.

Jackson is charged that on March 15, 2018 at Heritage Square, Kingstown, he attempted to murder Errol Hinson of Enhams and Veron Williams of Kingstown Park.

Jackson was also charged with conspiracy to commit robbery at Heritage Square, also on March 15.

Hinson, 69, a security officer, received a gunshot to the left side of his jaw, while Williams, 43, of Kingstown Park, was shot in the left side of her back when a gunman attempted to rob the Lotto booth at Heritage Square.

Jackson was also ordered to report to the Central Police Station on Mondays, Wednesday, and Fridays between 6 a.m. and 6 p.m.