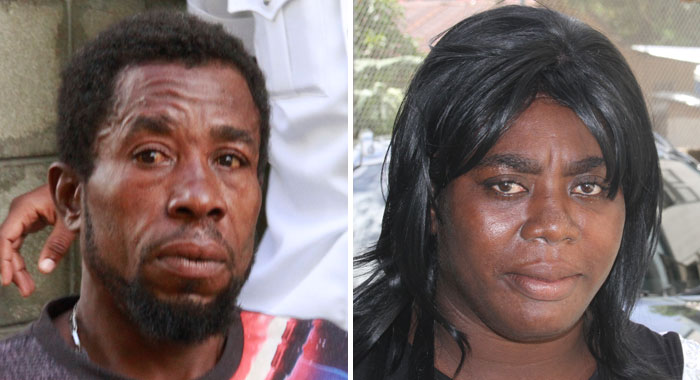 A Dickson man was, on Friday, jailed for four and a half years for chopping his sister on Aug. 24, 2017 in their home village.

Chief Magistrate Rechanne Browne-Matthias handed down the penalty on Cassion Pereira, two days after he pleaded guilty to a charge of wounding his younger sister, Tamisia Pereira.

Pereira was originally charged with attempted murder but the charge was reduced and he pleaded guilty to the lesser charge.

The court heard that about 1:45 p.m. on Aug. 24, 2017 at Dickson Village, Tamisia met her brother near the home of one Marcia Blake in Dickson Village.

On seeing him, referring to her brother by his nickname, Tamisia called out to him, saying, “Dogman, I thought you change. You still making promise.”

Cassion began to curse and told his sister, “Girl, don’t call my name or else I would f**k you up.”

Tamisia then asked her brother why is it that every little thing that happens between them he always wants to rush for cutlass to chop them up.

She walked away and went to the shop to purchase some goods.

On her way back, Tamisia, wanting to avoid her brother, took a different route.

While walking along that route, she looked back and saw her brother coming towards her.

He was cursing and telling her not to call his name.

On seeing that her brother had a cutlass, Tamisia told her brother, “You and Pat were cursing the other day. Why you didn’t bring cutlass at her?.”

Cassion then walked up to his sister with the cutlass raised and said, “Ah bet yo’ ain’t call my name again.”

Tamisia said, “Dogman” and Cassion fired a chop at her neck.

Tamisia raised her hand and was chopped in the palm of her right hand.

She ran away from the scene and was taken to the Georgetown Smart Hospital, where she was treated.

When the court asked for Cassion’s antecedents, Senior Prosecutor Adolphus Delplesche told the chief magistrate that there were none before the court, but that he knows that the defendant has a criminal record.

On Friday, when asked what he had to say for himself, Cassion told the court that his sister had aggravated him and that he was sorry.

“So all these times here, people aggravate you?” she asked him, referring to his criminal record, which included several convictions for wounding.

Delplesche noted to the court that Cassion has six or seven convictions for violence, including one for manslaughter.

“He says he is sorry, but look at his demeanour,” the prosecutor told the court.

“He feels he can do what he wants and go to prison. He said if he goes to jail, when he come out he will ‘f**k up somebody’,” the prosecutor said, referring to an alleged threat that the man made to his sister after being charged.

“We live in St. Vincent and the Grenadines. How can you chase your sister, aim a chop at her neck and by the saving grace of God, she put up her hand,” the prosecutor said.

When Tamisia took the stand very briefly, she told the court that she can no longer close her hand completely and has trouble washing.

The prosecutor noted that the defendant and virtual complaints are siblings born of the same mother.

“And a younger sister, too,” the magistrate noted.

“He should have been taking care of her,” the prosecutor said, adding that, upon indictment, Cassion could be sentenced to seven years in jail.

He noted that the man’s guilty plea afforded him a one-third discount on any sentence the court was considering.

The prosecutor, however, added that the aggravating factors could push the sentence back up.

“And it’s up I want it to go,” Delplesche said and recommended a sentence of five years imprisonment.

The magistrate noted that Tamisia — who had to leave the court because she was crying — was still shaken as a result of the incident.

“They are afraid of him and he is pompous in his ways,” the prosecutor added.

The magistrate said there seems to be truth to the report that Cassion had threatened further violence if he were [to be] imprisoned as a result of his crime.

“So it is very likely that you will continue with that kind of behaviour,” the magistrate said.