‘Jacket’, co-accused to be tried for murder 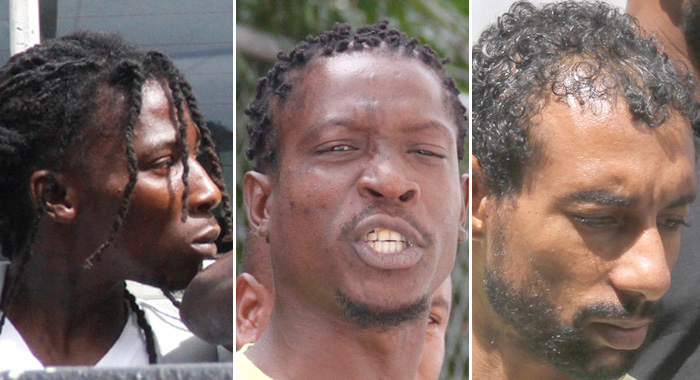 Rillan Hill resident Schemel “Jacket” Dunbar, 28, will be tried in the High Court on three counts of murder.

He will be tried on two counts along with fellow villager Kendeen “Hoodie” Douglas, 31, and Layou resident, 32-year-old Richard “Carib” Francis.

Dunbar will be tried singly in connection with the March 2017 murder in Vermont of villager Malcolm Pollin, 52.

The trio has been charged with murder in connection with the May 4, 2017 murder of Police Constable Danroy Cozier, 26, of Mesopotamia, and his younger brother, Nicholas Cozier, 19, of Richmond Hill.

The brothers were found shot dead on Sion Hill beach around noon on May 4, 2017.

Reports are that the men were shot and killed sometime earlier that morning and their bodies dumped on the beach.

The men were arraigned on May 8, 2017 and, after several adjournments, Chief Magistrate Rechanne Browne-Matthias on March 19, 2018 granted the Crown a final adjournment to allow prosecutors to begin a preliminary inquiry.

However, when the matter was called on Monday, Senior Prosecutor Adolphus Delplesche told the court that the Crown had applied for and obtained from the High Court a voluntary bill of indictment.

“So it is out of my court,” the chief magistrate commented after hearing the prosecution’s submission.

Defence counsel Ronald “Ronny” Marks, who represents Francis in the matter, told the court that while the chief magistrate was correct in her observation, it would be remiss of him if he sat there and did not protest.

He asked why it had taken so long for the prosecution to go that route, adding that the matter could have been expedited and finished had the prosecution made its decision sooner.

The lawyers said that the prosecution had indicated that they would have proceeded by way of paper committal — a process through which the defence, prosecution, and the magistrate analyse the witness statements and decide if a case has been made out.

Marks said that from looking at the statements, he understands why the prosecution had chosen to proceed by way of indictment, adding that the case against Francis was “flimsy” at best.

Counsel Grant Connell, who is representing Douglas, said he joined Marks in his observations, but added that he has “grown accustomed”.

Dunbar did not have a lawyer.

Meanwhile, the prosecution also announced that they would be proceeding against Dunbar by way of indictment in relation to Pollin’s murder.

The chief magistrate had, on March 29, granted a final adjournment for a preliminary inquiry into the murder of the man who was shot and killed in the street as he attempted to escape assailant(s) who first accosted him at his home.

Dates for the High Court trials are yet to be announced.

Dunbar has already been freed of two murder charges at the preliminary inquiry stage because of the failure of witnesses to testify.

2 replies on “‘Jacket’, co-accused to be tried for murder”