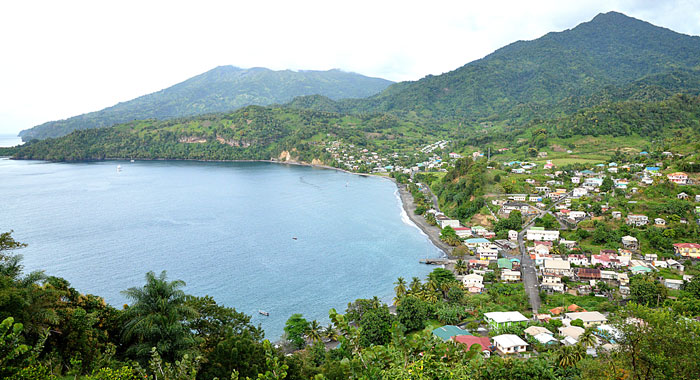 Chateaubelair is one of the 12 target communities of the Volcano Ready Communities in St. Vincent and the Grenadines.

The “Volcano-Ready Communities in St. Vincent and the Grenadines” project targets 12 towns and villages in the high-risk zones around the La Soufriere volcano.

It specifically seeks to improve early warning and alert systems; train early response and risk assessment teams; develop a “volcano-ready” framework and toolkit for communities; and create public education and awareness materials to be shared with schools, businesses, and residents.

“We want to ensure that people here can live safely and resiliently and enjoy their lives, so that when bad things happen because of the environment that [they] won’t be knocked back as badly,” said Richard Robertson, director of UWI-SRC.

He further explained: “When we speak about ‘volcano-ready communities’ we’re speaking about it in the context of a volcanic environment. Yes, the volcano erupts from time to time, but the very nature of the volcanic landscape is such that it poses certain hazards. For example, all of the loose material around is great for crops and farming, but it means that when rain comes, it strips off the materials and creates flash floods. When you have a storm, because the land falls away so quickly, storm surge comes in and damages the coastline. So, you’re really in a multi-hazard environment.”

Following successful completion of the project, St. Vincent and the Grenadines will be the first country in the region to hold a “volcano-ready” designation.

The 12 communities targeted during the two-year project have been divided into two groups.

On the Windward side: Big Level, Colonarie, Fancy, Overland, Owia, Park Hill, Sandy Bay and South Rivers; and on the Leeward side: Chateaubelair, Fitz Hughes, Rose Hall and Spring Village.

The official Project Launch was held on April 6, 2018 at the Sandy Bay Government School, and attended by beneficiaries of approximately six of the targeted communities.

“Communities are most affected by disasters and they are the first responders in the case of disasters. In some cases, they are even aware of the event before the central authorities know about it. Therefore, community-based disaster risk reduction should be at the core of any risk reduction effort,” said Benôit-Pierre Laramée, senior director of the Caribbean Regional Programme within the High Commission of Canada, and Canada’s Director to the Caribbean Development Bank (CDB).

The project is being administered through CDB’s Community Disaster Risk Reduction Fund (CDRRF) and is supported by the Government of Canada and the European Union.