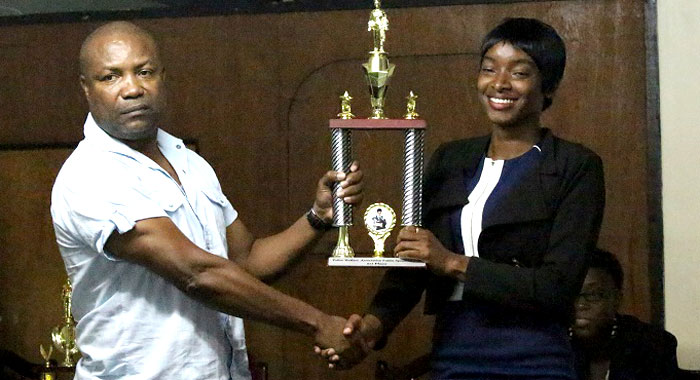 The other participant was PC 571 Gideon Nathan, attached to Telecom,

The 66th anniversary celebrations were held under the theme “Sixty Years of Resilience, Moving Forward together despite the Challenges” and Friday’s public speaking competition was held at the Police Training School in Old Montrose.

The competition was organised in three categories

Each participant was required to debate on the topic: “How effective are the changes in the Royal St. Vincent and the Grenadines Police Force (RSVGPF) to the development of policing in the 21st Century.”

They also delivered a prepared speech and randomly selected a topic for the impromptu speech.

In the prepares speech segment, the participants, except, Lavia expressed the opinion that there is still room for growth and improvement in the constabulary.

Lavia opined that since the establishment of the RSVPF in 1834, the constabulary has made great strides, in the advancement of both human and technical resources.

Nathan said that although the organisation has come a long way, there is a need to go back to the drawing board to discover those areas that have shown little or no development throughout the years.

Noel shared a similar view, and highlighted that though police officers in the 21st century may appear to be in a much better position financially, the salaries are no different from the 20th century, when you consider inflation and higher taxes on goods and services.

Samuel stressed the importance of protecting police officers in the line of duty. She said the leaders of the organisation needs to consider that we are living in changing times, and police officers face more threats to their safety than ever before.

Samuel made this remark in reference to the increased need for firearms in the constabulary.

In the prepared speech category, the competitors spoke on varying issues affecting the Police Force.

Lavia spoke on juvenile violence; Samuel on “Should Police Officers be equipped with firearms”; Noel on “Sexism in the Police Force” and Nathan “A tribute from the Heart”.

Noel was adjudged the winner of this category.

The final category was the impromptu and what appeared to be the crowd favourite.

Lavia randomly selected the topic “Promotion”; Samuel spoke on “Police are human beings too” while Noel and PC Nathan picked the topics “If I am the COP for one day” and “Social Media” respectively.

Nathan was the winner in this category.

In delivering brief remarks during the official opening ceremony, Commissioner of Police, Colin John congratulated the Police Welfare Association on its 66th anniversary.

He said that he welcomes very much the initiative and the collaboration with the Welfare Association in having such a debate in the organisation. In commending the welfare association, the commissioner pointed out some of the ways in which the police force can benefit from having a public speaking competition.

John said events such as these help to improve the confidence of the police when they interface with members of the general public on a daily basis. He further stated that it can also assist police officers when they are giving evidence in the court. The commissioner emphasised that if police officers fail to give proper evidence in court, this can result in the case being dismissed.

In addition, John stated that the debate will be used as a means of selecting persons to be assigned to the Public Relations and Complaints Department of the Royal St. Vincent and the Grenadines Police Force.

Smith welcomed everyone to the event by saying that the competition was not only an element of the Police Welfare Association’s anniversary activities, but it serves as an avenue for Police Officers To Speak confidently and critically on issues that affects the organisation. The welfare chairman further stated that it is his hope that the debate will help to spur on some positive changes within the police force.

The event was also interactive, and engaged the audience in competitions, giving them the opportunity to win a number of prizes.