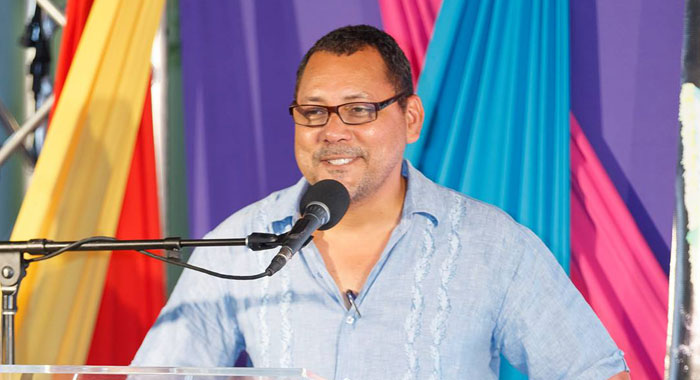 The calendar of activities for Vincy Mas 2018 will not be as expensive as the one that marked the 40th anniversary of the festival as a summer event.

“But that does not mean it is any less energetic and so, therefore, while we are starting a little later than we did last year, we are going to pack the same energy that we had last year into a shorter programme than last year,” chair of the Carnival Development Corporation (CDC), Ricky Adams told the media launch of Vincy Mas 2018 in Kingstown last week.

This year’s festival will be launched on May 5 with shows in Kingstown and New York.

This year’s edition will include soca semi-finals, which were introduced last year and will continue as a cooler fete-type show.

“That is going to be fantastic,” Adams said, adding that all the traditional shows will continue on the days on which they have usually been scheduled.

Continuing on the success of Evo 4.0, which was introduced last year as part of the 40th anniversary celebrations, the CDC will this year host Evo 4.1.

Adams joked: “I am not allowed to say this in public but I call it the soca monarch for the mature crowd. So, nobody quote me on that. I hope nobody is listening. Oh, sorry, it is a little late for that.”

He said that show was “really fantastic” last year and saw “the mature people and the young people blending together, having a fantastic time and dancing in the rain.

“So we are hoping that we can continue to provide the energy to that event this year.”

This year, carnival planners will have tickets for sale as early as when the festival is launched.

Tickets will be available in physical and electronic formats.

The CDC boss said that the corporation is trying to organise packages for CDC shows, adding that the CDC is inviting private promoters and bands to partner with them in this regard.

Adams invited the components of carnival to work along with the CDC.

He said the CDC is working with organisers of the May 5 launch of Vincy Mas in New York, who have asked the CDC to get the mas bands to send them contact information and pictures of their presentations, “so that when they launch out there they can really market the individual aspect of Vincy Mas and help us to push it, because that is where we are going with Vincy Mas.”

Adams urged support for the festival.

“… I know that there is a feeling in some circles that Vincy Mas is not something that is beneficial to the country; it is an opportunity for us to release some steam but that it does not financially benefit the country. Guyana just launched their first Carnival ever. Jamaica just had a huge carnival on the weekend. There are investing a lot of money into their festival,” he said, adding that Barbados’ Crop Over is marketed in SVG.

“Everybody who has a carnival is trying to make it bigger. There can only be one reason for it and it’s because carnival is of benefit to the country. That is because people recognise that festival tourism is where we, in the Caribbean, can really market ourselves and continue to grow,” Adams said.