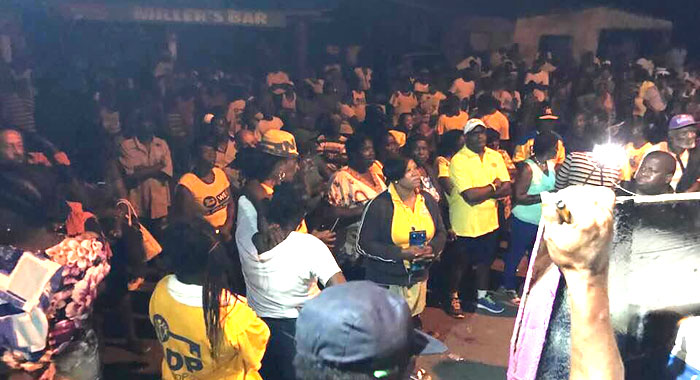 A section of the crowd at the rally on Saturday. (Photo: Facebook)

A former Member of Parliament for North Windward who is hoping to make a comeback to electoral politics has accused the Unity Labour Party administration of abandoning the constituency.

“… as I look at North Windward now, and especially so, this area of Sandy Bay, I am very ashamed, very, very ashamed of what this community and this constituency has been reduced to by the Unity Labour Party.

“Somebody says it is forgotten. I say it has been abandoned,” Monty Roberts told a meeting of the New Democratic Party in Sandy Bay Saturday night.

He did not seek re-election in those elections and has retired from politics since, but seems willing to make a comeback for the next election.

If he returns to electoral politics, Roberts would become the second politician in as many elections to come out of retirement to contest the vote, the other being Sir Louis Straker of the Unity Labour Party.

Speaking at Saturday’s rally, Roberts said that youth in North Windward are suffering because the ULP had done nothing to develop them.

The former MP said that when he represented the district, he had four playing fields being developed simultaneously: in Fancy, Owia, London and Overland.

He said his aim was to develop the London Playing Field — because it is by far the largest — as the number one in North Windward.

“I started a building there to be used as a washroom and a changing room. Just like how I left it 17 years ago, it is the same way. Nothing else has been done to it.

I started one in Orange Hill. Just like how I left it — same way.

“And you say you like youth? So the youth who are idling don’t even have a proper place to go and kick a ball because the playing fields are so run down.”

Roberts said that Owia has a lighted hard court.

“Somebody has to tell you that there used to be a hard court there… They have all been abandoned.

“I believe that this constituency has more government-abandoned buildings that any other constituency in St. Vincent and the Grenadines.”

Roberts spoke about the issue of unemployment in the district.

Putting things into perspective, he referred to the International Monetary Fund report last year, which, citing government figures, said that 46 per cent of youth in St. Vincent and the Grenadines are unemployed.

Roberts, however, said that constituents say that that cannot be true, adding that one guy told him that in North Windward the figure might be more like 64 per cent.

“And if you really want to see something about unemployment here in North Windward, come through here on any given day. Drive through this constituency on any given day and look at the blocks, as we call them; look at the shops, the walls, wherever young people hang out and you would be amazed at the number of young persons with nothing to do, just wasting their lives away.”

He said the ULP has to be blamed for that.

“They are the ones who destroyed our agriculture programme, which provided employment for a number of persons here in this constituency.”

He said that one of the chief architects of the destruction of the banana industry is now manager of the Owia Arrowroot Factory.

“What that is saying to you is that they set out to destroy the arrowroot industry,” he said, adding that the latest he has heard is that factory workers were only paid for one of the six weeks they worked.

“Arrowroot is an annual crop. You have to wait a whole year before you can get some money in your pocket,” he said, adding that for the past six years, farmers have had to wait four or five months before they are paid for their rhizomes.

“And sometimes, they pay you in instalments.”

Roberts was of the view that had the government appointed one of their supporters in Sandy Bay as manager of the arrowroot factory, that person would have done a better job because of their intimate knowledge about the industry.

“And I am sure that the people in the area here would have been much happier having one of their very own managing the arrowroot industry than to bring somebody from outside, … Selmon Walters, who doesn’t even know what arrowroot looks like,” said Roberts who managed the industry for two years.

“And for those two years, farmers were able to get financial assistance to help them to harvest the rhizomes until they sold their crops.

“We used to start [harvesting] the crop on time,” he said, adding that then Prime Minister of Finance, Sir James Mitchell would authorise bridging loans to the industry so that farmers could be paid on time.

“The NDP was for the people of North Windward. Today, Labour don’t care anything about us up here. We are a forgotten people, we are an abandoned people.”

Roberts said there are four or five waterways between Orange Hill and Sandy Bay, which with, “the slightest of shower of rain which falls, we are marooned here. We can’t get out and we can’t come in.

“He said that apart from that, people who live on the banks of those waterways have lost parts of their homes during the last two floods.

“Half of their homes [are] gone and they live in half. Some have lost their homes completely,” he said.

He acknowledged that the government is paying rent for the affected persons, but said that many of them have told him that they are ready to rebuild but need land.

“But I say that land is not a scarce commodity in North Windward. We have more lands here than any other constituency in this country,” he said, adding that the NDP gave over 3,000 acres of lands to residents of the constituency.

“The ULP came in and they began to take back some of the land from them. Would you imagine that?”

He said that the NDP built 22 miles of feeder roads in those lands, but the roads are now in dilapidated conditions, making it difficult for residents to access their lands.

“But we all know they have no interest in agriculture anyway,” he said of the government.

“We saw what they did with the banana industry and they are threatening the arrowroot industry now,” Roberts said.

He also spoke of his role in providing pipe borne water to several communities in North Windward.

2 replies on “North Windward ‘has been abandoned’ — former MP”