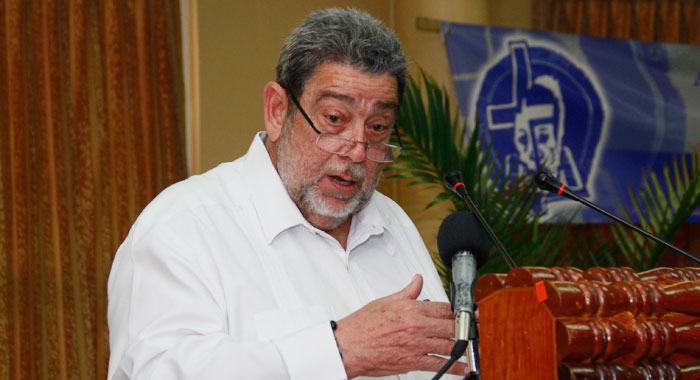 While St. Vincent and the Grenadines recorded record levels of killings in 2016 and 2017, Prime Minister Ralph Gonsalves says this does not mean that a trend has started.

“It is too early to assert that the new high for both reported murders and the number occasioned by gunshot wounds represent a trend. It is important, however, that the numbers for 2016 and 2017 do not become quote-unquote the new normal.

Part of our challenge is to stem the increase and to reverse it,” he said on Wednesday in Kingstown at the opening of the two-day “National Conversation on Crime and Violence”.

“We have to reflect on guns, availability of guns,” said Gonsalves, who is also Minister of National Security, and mentioned his oft-repeated observation that SVG is located “in a dangerous neighbourhood”.

“It is well known that there has been an increase in the prevalence and incidence of violent crime in recent years throughout the Caribbean, including St. Vincent and the Grenadines and this increase in both the prevalence and incidence of violent crimes is unacceptable. It is a growing challenge for our policy makers, communities, and nations,” Gonsalves said.

The prime minister presented what he said was a brief analysis of violent crimes by interrogating the statistics in SVG in relation to murder.

“I want to focus on this particular matter since it is the one which we all are, perhaps, most concerned about without in any way diluting, diminishing our concern for other forms of criminal conduct,” he told the event, which was hosted by the St. Vincent and the Grenadines (SVG) Christian Council in collaboration with churches, non-governmental organisations and other stakeholders,

Gonsalves said that in the years between 1990 and 2002 or thereabout, the number of murders ranged between the teens and the twenties.

This year, so far, SVG had recorded seven murders — six of which are from gunshot wounds.

“That’s where the cluster was. In the earlier period, 1990 to 2002, thereabout — and I put 2003 in the other time series to make this point, and I choose the words ‘alternated’ and ‘oscillated’ on purpose: in the period between 1990 and the early years of the 21st Century, the first couple years of the 21st Century, you will have in the teens one year, the next year, you will have in the 20s and it goes back into the teens, almost with a regular alternation.

“It is important for the understanding and for the analysis to see the alterations and the oscillations,” Gonsalves said.

The prime minister said that the percentage of the gunshot-related murders between 2008 and 2015 was 46.7 on an average annually.

The prime minister said that as far as availability of guns goes, he would say that the countries most relevant in this respect as part of the dangerous neighbourhood are the United States, Trinidad and Tobago, Colombia and Venezuela.

He noted that in the United States, there is a constitutional right to bear arms.

“So there is a problem of the source of guns. We don’t make guns and we don’t make bullets.”

He said that one way his government has sought to make people feel safer was to take the gun licensing arrangements out of the hand of one person — the Commissioner of Police — and set up a firearm licensing authority, which includes other people.

The prime minister further said that his government invested EC$2.5 million in a shooting range to teach people how to use firearms and to make the granting of licenses “a more rational process and connected to people’s safety”.