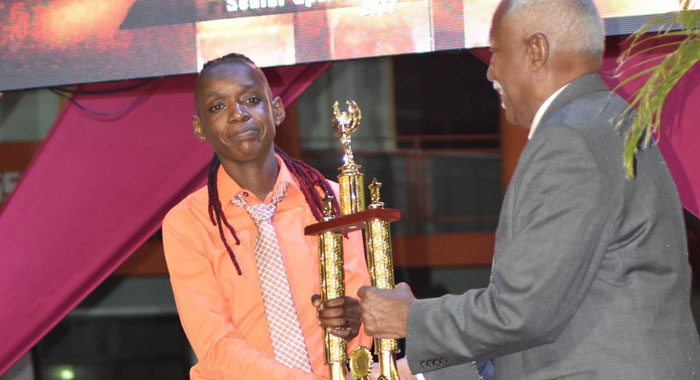 Cricketer Sunil Ambris and long distance runner Linda Mc Dowall have been adjudged senior male and female sports personality of the year 2017 in St. Vincent and the Grenadines.

In St. Vincent and the Grenadines, Ambris scored 188 for his club — Guardian General Saints versus Victors 1 in the 2017 National Lotteries Authority Premier Division.

In the Winlott Inc. Windwards Islands tournament, Ambris, the SVG captain, tallied 298 runs, including one century and two half centuries.

His average of 74.5 was the best in the tournament.

His 608 runs placed him seventh in the best run- scorer table.

Ambris, playing for West Indies A versus Sri Lanka A in three unofficial tests in Jamaica, was the most consistent batsman as he notched up two centuries 106 and 101.

Earning a call up to the West Indies ODI team in the series versus India, Ambris eventually made his debut versus England in Southampton, posting 38 not out.

He hit 153 for West Indies in warm up match versus New Zealand A in New Zealand last November.

Ambris went on to make his test debut in New Zealand, but had to leave the tour because of a broken hand, sustained in the second test.

Meanwhile, Nominee Kesrick Williams in 2017, emerged as one of the West Indies’ most consistent bowlers in the twenty/20 format.

He also outperformed footballer Myron Samuel, who helped Avenues United in taking the Premier Division of the National Club Championships.

The other nominee was Junior Ashton, the highlight of whose performance in 2017 was his retention of the NACAC Chatoyer Endurance 10k, which was run from Gordon Yard to Chateaubelair.

In 2017, Mc Dowall scalped the women’s division of the South America 10k in Guyana, for the first time.

Her winning time was 39 minutes 50 seconds, ahead of second place, Grenadian, Kenisha Pascal.

Her time of 51 minutes 29.72 seconds, put her ahead of Grenada’s Kenisha Pascal and Chantel Glasgow of St Lucia.

Inclusive of her tally, were three centuries and one half century.

On the other hand, in the local women’s super-40 cricket, Nero carried her team- Garifuna Stars on her shoulder.

She compiled 319 runs and captured 11 wickets, to be named the competition’s best all-rounder.