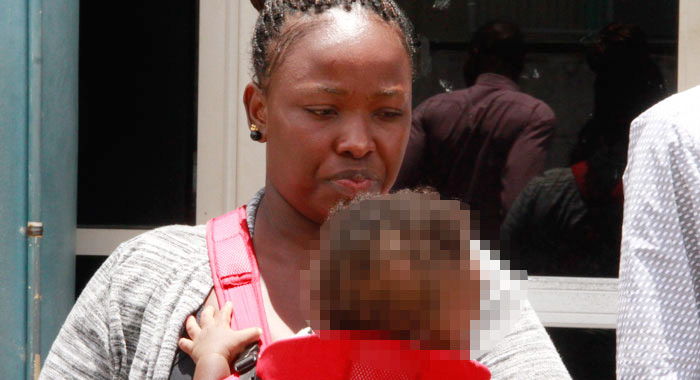 The accused, Latish Williams, leaves the Kingstown Magistrate’s Court with her baby after her April 23 court appearance. (iWN photo)

A Buccament Bay woman will know on Friday whether the prosecution has made out a case to which she will answer regarding her alleged theft of EC$6,760 in cellular phone credit from her former employers.

Latish Williams, 25, is charged with 68 counts of theft in connection with EC$6,760 in Digicel credit she allegedly stole from Harmony Investments, in Kingstown, between Jan. 18 and Aug. 30, 2016.

She has pleaded not guilty to the charges and a trial began on Monday before Senior Magistrate Rickie Burnett at the Kingstown Magistrate’s Court.

The Crown is alleging that the woman stole the money by forwarding to her personal cellular phone credit that her employers had bought for further retail to its customers.

The first witness for the prosecution was Martin Laborde, chief executive officer of Harmony Investments Ltd., a wholesale and retail business.

He said Williams began working with the firm sometime in late 2014 or early 2015 and her duties included cashing, packing shelves and the selling of cellular phone credit.

The executive said that on Aug. 30, 2016, he received certain information and, as a result, called Williams into his office.

Laborde said he told Williams that her supervisor had noticed a shortage between the phone credit sales and what was recorded.

“She denied there was any discrepancy. I told her that we had evidence,” he said, adding that the record had shown the discrepancy on the previous day, Aug. 29, 2016.

Laborde said he told the woman that if she did not admit, he would involve the police.

He said Williams was brought to court and judgement was entered against her.

Laborde further said that his company carried out further investigations, which revealed that EC$6,760 in mobile phone credit was unaccounted for.

The manager said he had arrived at that figure by getting a print out from Digicel and checking it against the sale records at Harmony Investments.

Laborde told the court that at Harmony Investments, when a customer buys credit, the staff is supposed to record the number to which the credit is sent and the amount in a book.

He said Digicel’s system could also check the numbers to which Harmony Investments sold the cellular phone credit.

The apparent agitation that Laborde had shown towards Prosecutor Police Constable Corlene Samuel’s questions during his evidence in chief continued as the witness was cross examined by defence counsel, Ronald “Ronny” Marks.

“You threatened that if she didn’t admit you would call the police?” Marks told the witness, who responded that his words were not a threat.

However, the defence counsel maintained that Laborde had threatened his former worker.

Marks told Laborde that if one tells another person to do something or else something unpleasant would be done to them, it is a threat.

The lawyer further suggested to the witness that he continued to intimidate Laborde.

“Not that I am aware,” Laborde said.

Marks asked him if Williams was arrested and held in custody overnight.

Laborde said he believes so.

Laborde, however, denied having friends in the police force, as Marks suggested during an exchange in which the witness, rather than answering the lawyer’s questions, was asking questions in response.

At this point, the magistrate intervened, telling Laborde that he has to answer the defence counsel’s questions.

“He is doing exactly what I want him to,” Marks, however, commented. “He is showing his character, and that is important to my case,” Marks said.

The lawyer further said that Laborde had heard that Williams had later gotten a job at Massy and he called the supermarket and got her fired.

“That is a lie,” Laborde said.

Simmons said she is the supervisor at Harmony Investments, where she has been working for about six years.

Myers-Simmons told the court that during the time when the alleged crimes were reportedly committed, she had Williams’ cell number and those of other staff members.

She told the court that the company’s investigation found that all the credit that was unaccounted for had been sent to Williams’ number.

Myers-Simmons said that in order to check the records of sale of mobile phone credit, she was given a user name and password.

She said that after obtaining the records, she observed that large amounts of credit were being sent to Williams’ cellular phone number.

The witness said that while she knew Williams’ cellular phone number at the time, she could no longer remember what it was.

She said she is authorised to check or delete the automated messages but she did not delete any.

At Harmony Investments, the number to which credit is sold is recorded in a book but the information in the book did not correspond with that generated by Digicel’s system, Myers-Simmons said.

During her evidence in chief, Myers-Simmons had been shown a document that her boss — Laborde—had earlier told the court he had prepared, showing the transactions for which monies are alleged unaccounted for.

Myers-Simmons told the court that the document showed that the number to which the credit was sent was Williams’.

During cross examination, Marks asked Myers-Simmons if the document she was shown in court had a number highlighted. She said yes.

He noted that before seeing the document, she had said that she could not recall what Williams’ mobile number was.

Also testifying on behalf of the Crown was Belmar Murray, an employee at Harmony Investments, who said her duties were similar to Williams’.

She said that she, at times, would buy phone credit from the store, but would always ask a supervisor to make the transaction

Murray also said that she could delete the reference messages from the phone used to retail the mobile phone credit, but would rather her supervisor do it.

She further told the court that she would take over the cashier functions at any point — say if Williams wanted to use the bathroom.

Williams told the court that they were not rigid in returning to their post as cashier after being relieved temporarily by a co-worker.

The balance on the cellular phone credit account, however, was checked at the end of every day, she said.

The final witness for the Crown was the investigator, Detective Police Constable Sheffique Joseph.

Joseph read to the court a caution statement in which Williams said that all the credit she sent to her phone was paid for but sometimes she would forget to enter the sale into the company’s record.

She further told the detective that other employees used to take credit until payday.

In his no case submission, Marks said that theft refers to dishonestly appropriating property belonging to another with the intention of permanently depriving them of it.

“Your honour, what is credit?” he said, adding that mobile phone credit is not a tangible thing.

“Property belonging to whom?” the lawyer further stated.

“The person selling it doesn’t own it. It belongs to Digicel.”

“If we are going to prosecute, probably fraud, but not theft.”

The lawyer said that the prosecution has to prove that the credit was not paid for, adding that the Crown could not be allowed to simply produce a printout from an unidentified source.

But in response, the prosecutor said that the trial was not yet at the point where the defence could say that the Crown had not proven its case.

Samuel said that while the credit is Digicel’s phone credit, the witnesses have told the court that Harmony Investments bought it for resale.

“If you buy something, it belongs to you,” Samuel said.

She further noted that Myers-Simmons had spoken about an automated message sent to the Harmony Investments’ phone to show the numbers to which credit was sold.

She said that when Myers-Simmons checked the phone, the messages were deleted.

“Why did the defendant delete the messages?” Samuel said, triggering an objection by the defence counsel.

Marks said that the prosecutor was usurping the role of the magistrate and, in so doing, had convicted and defamed his client.

In her further response to Marks’ no case submission, Samuel noted that while the defendant has said in her caution statement that she paid for credit whenever she sent it to her phone, at no time was any entry made in Harmony Investments’ records that the defendant had purchased credit from the company.

“Wouldn’t a reasonable person conclude that she is dishonest?” the prosecutor said.

But the defence lawyer said that having no entry in the book cannot be relied on to say Williams did not pay for the credit.

“The arrangements were informal. What has to be proven is that it wasn’t paid for,” he said.

The magistrate said he would go over the evidence carefully and give his ruling on Friday morning.