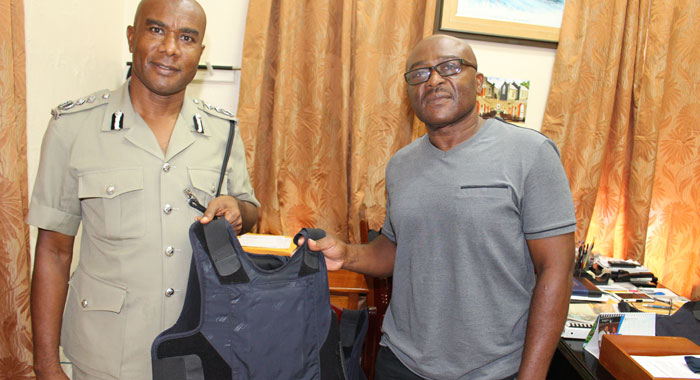 New York-based Vincentian, Lantie Castello, a police officer, currently working in the New York City Sheriff’s Department for the past 28 years, has donated 17 bullet proof vests to the Royal St. Vincent and the Grenadines Police Force.

Joseph said it is always a good thing when citizens of SVG give back to the police.

He stated if the police have to fight crime alone, the organisation would not be successful, as it would want to be, as he outlined the donation of additional resources to be one that is well needed.

The deputy police chief reflected on the issue of crime in SVG over the past few years and highlighted the rise in gun crimes throughout the country.

He pointed out that guns are used to commit most homicides and, therefore, praised Castello for his timely and much-needed donation.

Joseph said that the safety of police officers is paramount.

He said there are times when the men and women within the police force are short of or do not have the necessary protective armour, but still have to risk their lives to ensure the safety of citizens.

He said the donation will go a long way in protecting police officers whilst on duty.

In commending Castello for the donation, Joseph said he hopes that other businesses in SVG would feel motivated to make similar and other donations to the police to aid in fighting crime.

Meanwhile, Castello said he sees the need to keep up with 21st century law enforcement.

He recounted conversations about a year earlier about getting enhanced body armour for the police force.

Castello said the view that saving one police officer’s life is a good thing and that, as law enforcement officers, we are all in it together.