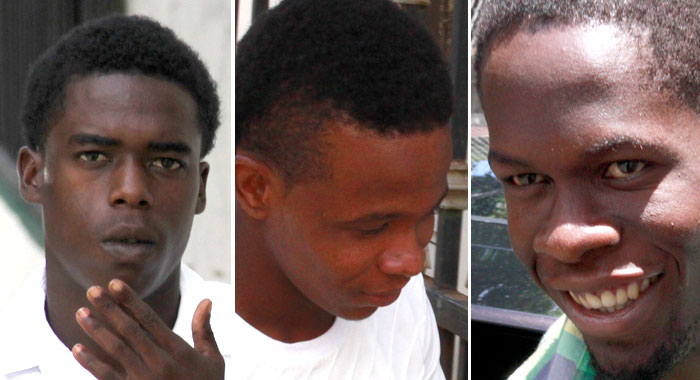 Three Bridgetown men, who beat a Cedars villager and stole his wallet and EC$350 during an attack last June, received suspended prison sentences at the Serious Offences Court in Kingstown on Monday.

Addressing the men, Chief Magistrate Rechanne Browne-Matthias told one that she wanted to give him a chance to continue his education,  another, an opportunity to maintain his job, and told the third — who has a previous conviction — that he should use the chance to do something meaningful with his life.

Additionally, she pointed out to Leron Christopher, 18, that he would have had to pay EC$1,000 or go to jail had a bond imposed on him in December 2017not come into effect after the commission of the crime for which he pleaded guilty on Monday.

Christopher, Jamel John, 17, and Jared Clarke, 20 were initially charged with robbery and a preliminary inquiry had already begun in the matter.

However, on Monday, they pleaded guilty to the lesser charge, that on June 16, 2017, they stole one black wallet, value EC$30, containing EC$350, the property of Carlyle Walker of Cedars.

The court heard that Walker normally walks from Cedars to Biabou to attend karaoke at his sister’s shop.

About 10:45 p.m. on June 16 last year, Walker was making one such trip when he saw the men who would attack him sitting near Harris Cain’s shop in Biabou.

He didn’t pay them any attention and continued walking.

When Walker got close to the Pentecostal Church in Bridgetown, he felt a lash to the lower part of his back and he fell to the ground.

Walker became fearful for his life and asked his attackers to stop beating him and asked them what they wanted.

Christopher put his hand in Walker’s pocket and took out his wallet, which contained EC$350.

While Christopher was doing so, Walker recognized him.

After taking the wallet, the assailants ran.

Walker had sustained injuries about his body and at about 11:45 p.m., went to the Biabou Police Station and reported the matter.

Police Constable Shemron Roberts launched an investigation and the accused men later took him under the bridge in Biabou, where they removed a stone from under the water and handed over the black wallet to the police officer.

In mitigation, John told the court that it was his first offence and that he had been expelled from school but was trying to continue his education at the Georgetown Technical Institute.

Clarke said it was also his first offence and promised that it would never happen again.

He said that he had since secured a job in construction and would pay a fine.

The magistrate ordered the men to compensate Walker in the sum of EC$116.60 each by April 30 or spend one month in jail.

Browne Matthias told the men that she was imposing upon them suspended prison sentences of six months.

“The onus is on you to take the second chance you have been given,” she said.

6 replies on “Youths who attacked older man get second chance”