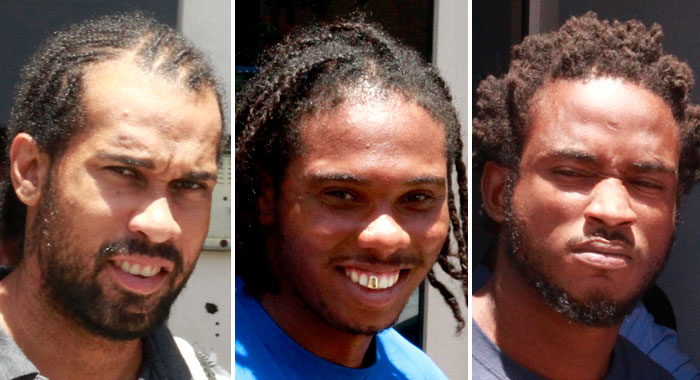 A Trinidadian man who recently completed a six-year jail sentence in St. Vincent and another who was deported eight years ago were among three nationals of that country brought before the Kingstown Magistrate’s Court on immigration charges on Monday.

Joel Median, Steve Median, and Ricardo Espinosa were charged that on April 26 at Union Island, being prohibited immigrants, they entered St. Vincent and the Grenadines (SVG) by boat other than at a port of entry.

They were further charged that on the same date, at Union Island, being prohibited immigrants, they entered SVG by boat and disembarked without the permission of an immigration officer.

The third charge was that being prohibited immigrants, they entered the country without a passport.

The men pleaded guilty to the charges when they were arraigned before Senior Magistrate Rickie Burnett.

The court heard that the SVG Coast Guard, acting on information, went to Campbell Bay, Union Island, where they met a white pirogue bearing Trinidad and Tobago registration number FG2934 secured to the jetty.

There were no occupants in the vessel and, acting on further information, police and coast guard officers went to a house, where they met the defendants watching television in an apartment.

They had no immigration documents and were therefore taken to the Union Island police station.

The defendants had no form of identification or customs and immigration clearance.

They volunteered statements admitting to entering the country without travel documents.

Prosecutor Police Constable Corlene Samuel further told the court that Steve Espinosa was deported from St. Vincent and the Grenadines on May 23, 2017 after serving nine months in prison for possession of illegal guns and ammunition.

Medina, she further said, was deported for possession of controlled drugs.

Defence counsel, Israel Bruce, however told the court that Steve Median was never convicted for guns and ammunition.

Regarding the immigration offences, Bruce told the court that the defendants left Trinidad and Tobago after receiving a call to assist a vessel that had run short of fuel about 60 miles off that country.

He said that the defendants’ boat had two outboard engines, one of which broke down about 45 miles into the journey.

The other engine, Bruce said, began to “pull water” causing the boat to drift for about one and a half days.

He said his clients were met by fishermen from Union Island, who towed them to the southern Grenadine island.

Bruce said that his clients asked the men for help in locating the coast guard personnel in Union Island but where told by the fishermen that they had already offered them enough assistance.

The men spent a night in the open before a resident of Union Island told them that if they go to the Rapid Response Unit (“Black Squad”) outpost they would be beaten, Bruce said.

That person, however, offered the men the use of an apartment to freshen up before taking them to the police station.

Bruce said that it was while the men were at the apartment that police nabbed them.

He said his client had no plans for coming to SVG, hence the absence of travel documents.

The men were ordered to pay EC$1,500 each forthwith or go to prison for one month.

The court also ordered that they be deported.

2 replies on “Trinis who served time in SVG return illegally”