Man fined for swearing at prosecutor in court 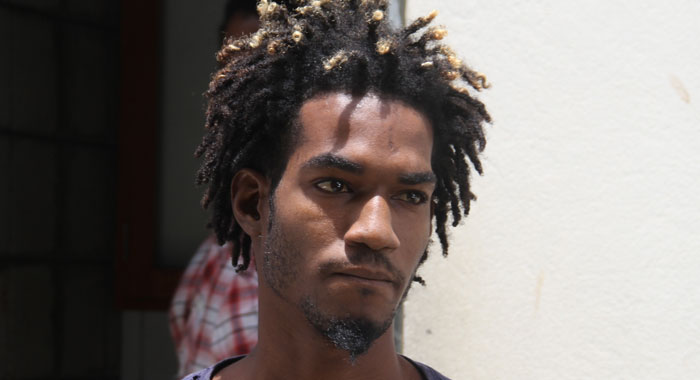 Stanley Gumbs was told to keep his temper in check. (iWN photo)

Chief Magistrate Rechanne Browne-Matthias on Monday cautioned a 22-year-old Park Hill man to control his temper, telling him that he might otherwise end up facing some of the most serious charges in St. Vincent and the Grenadines.

Stanley Gumbs was, at the time, before the Serious Offences Court in Kingstown for sentencing for swearing at a prosecutor at the Colonarie Magistrate’s Court.

The Serious Offences Court heard that on May 3, Gumbs was brought before the Colonarie Magistrate’s Court — sitting at Georgetown — on a bench warrant in relation to his failure to attend court in connection with two matters.

He had also been charged with two new offences.

When Gumbs took to the stand to answer the charges, the prosecutor, Sergeant Delroy Tittle asked the court to remand Gumbs in custody until his next court date.

Before Magistrate Bertie Pompey could respond to the prosecutor’s application, the defendant began to curse and told the prosecutor, “Yo get f***ing bad mind dey.”

Gumbs was escorted out of court and taken to the Georgetown Police Station, which is located in the same building and was charged.

In mitigation, Gumbs told the court that while he is “not the best person in life”, he has been trying to change.

He said that his father’s “so-called sissy (sister) who is in court now, hate every bone in my body”.

At this point, the chief magistrate interrupted the man, telling him that while he might be upset and frustrated, he cannot change who his relatives are.

“Make sure you evaluate yourself before pointing fingers at others,” she told the man.

Gumbs told the chief magistrate that he did not know that he had to go to court on that day.

He said that during the previous hearing in the matter for which he was initially before Magistrate Pompey, the plaintiff did not show up and the magistrate told him that he (Gumbs) would be summoned for the next hearing.

The accused man, however, said that he was not summoned.

He said that he and Tittle both live in Park Hill and the prosecutor sees him often but did not tell him about the court date.

The man further told the court that his language was not appropriate for court.

“Me nah must regret. Watch way me reach because of a word/ Jail ain’t nice, you know. Jail is not a nice place,” he further said in response to the chief magistrate’s comments that people often regret what they do and say when angry.

“Even with the most challenging situations, you have to practice self control,” she said, adding that some actions have really lasting and damaging consequences.

She, however, told the man that she cannot make it OK for him to feel that he had to use the words that he did at the district court.

Browne-Matthias said that the man’s attitude in court shows that he had a temper and was not trying to control himself.

“Don’t blame genetics,” the magistrate told Gumbs as he made a comment about his family.

She said that if Gumbs does not have respect in court, it is highly unlikely that he shows any respect to his family.

“I don’t like what I see here. You have temper issues and if you don’t control your temper, you could be heading in a direction of the worst type of charge,” she said.

The chief magistrate fined Gumbs EC$500 to be paid forthwith or, in default, one month in prison.

“You are young, you have many years ahead — God willing. You have to make use of them,” the magistrate told the man.