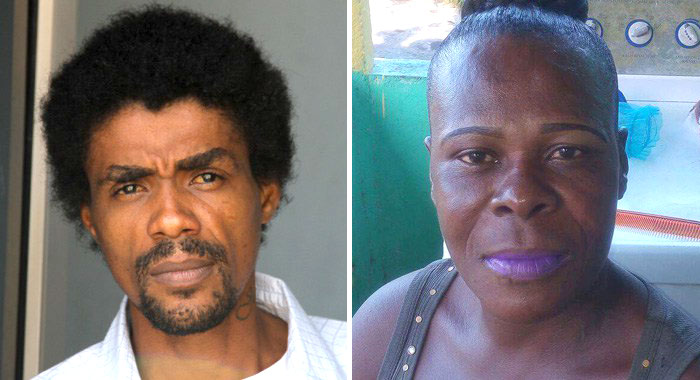 Pedro Ashton, left, is accused of killing his girlfriend, Monique Clarke, right, by setting her afire as she slept last August. (iWN photo)

Chief Magistrate Rechanne Browne-Matthias on Wednesday committed Biabou resident Pedro Ashton to stand trial for the murder of his girlfriend, who died last August after he reportedly set her afire.

The 33-year-old labourer was committed to stand trial after the court rejected a no case submission by his lawyer, Michael Wyllie.

Monique Clarke, a 44-year-old domestic, died Aug. 22, 2017, at the Milton Cato Memorial Hospital in Kingstown, where she had been warded after Ashton allegedly set afire at her home on Aug. 13, 2017.

It is alleged that Ashton reportedly committed the act after Clarke refused to have sex with him or give him money.

At the Serious Offences Court on Wednesday, Wyllie said he was being “charitable” in describing as tenuous the evidence presented by the Crown.

“I am not going to contend that there is no evidence but the evidence is so tenuous,” he told the court, adding that there is some circumstantial evidence but it did not rise to a level to be able to make a finding in respect of the chief magistrate sending the case to trial.

He argued that there was no direct evidence linking the accused to the crime for which he was charged.

The lawyer further argued that there was extensive hearsay evidence and asked that Ashton be discharged.

However, Senior Prosecutor Adolphus Delplesche argued that the evidence is not tenuous.

“In this case, there is strong circumstantial and good evidence,” the prosecutor said.

He further submitted that the Court of Appeal has ruled that once a case is made out, a question must be made for the jury to determine.

“We have evidence that is solid. The accused ought to be committed to stand trial” the prosecutor said — a position with which the magistrate agreed.

Ashton will be tried for murder at the next practical sitting of the High Court.

2 replies on “Man to face jury in fiery death case”