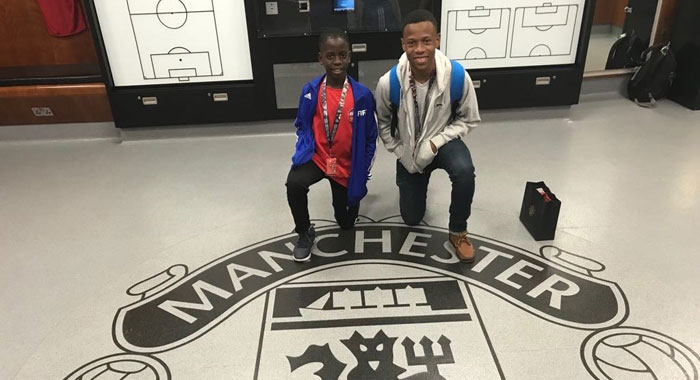 When 12-year-old Flow Skills winner, Jamaican, Brian Burkett departed for Old Trafford, little did he know that he’d be rubbing shoulders with the likes of Marcus Rashford whose goal in Manchester United’s 1–0 win over Watford sealed MU’s 2nd-place finish in the Premiership.

Skeete said: “The tour was really the ultimate experience. It was great to see the dressing room of all my favourite players – seeing all the jerseys – that was my favourite part of the tour. Going through the tunnel was also a great experience. I got to walk where the players actually walk, with the stands in the background.”

Burkett and Skeete scored bragging rights as the 2018 Flow Skills winners in their respective age group ahead of nearly 700 other contenders from 14 Flow Caribbean markets.

Now on their first trip to Old Trafford, courtesy of Flow and Manchester United, the winners got a true “Theatre of Dreams” experience complete with VIP tickets to the best seats in the house.

Barbados National Team Coach, Renaldo Gilkes who accompanied Skeete on his prize trip, proudly stated, “I’m really happy for Nathan, being a Manchester United fan and all, I know it was a dream come true for him. It’s testament and basically a reward for all the work Nathan has put in over the years. I’ve been working with him for the last few years as the national team coach and he is dedicated with a strong work ethic. He has an idea of where he wants to be in the future.”

“It was a magical experience,” said Brian’s dad, Albert Burkett.

The senior Burkett praised Flow for this initiative, which he said “changed my son’s life.”

He noted that Brian and Nathan are arguably “the two best young players in the Caribbean” and he considers them to be “privileged and blessed that they got a taste of how it feels and what it looks like to be a professional player”. He added, “Brian told me, ‘Daddy, it’s my dream and I’m going to go pro someday soon.’”

Flow’s Caribbean President Garry Sinclair said, “We are certainly pleased to continue this successful partnership with Manchester United, which provides youngsters with a once in a lifetime opportunity to be coached by some of the world’s best and to have a chance at pursuing their dreams. We are even more pleased to note the positive impact this initiative is having on the lives of our young people.”