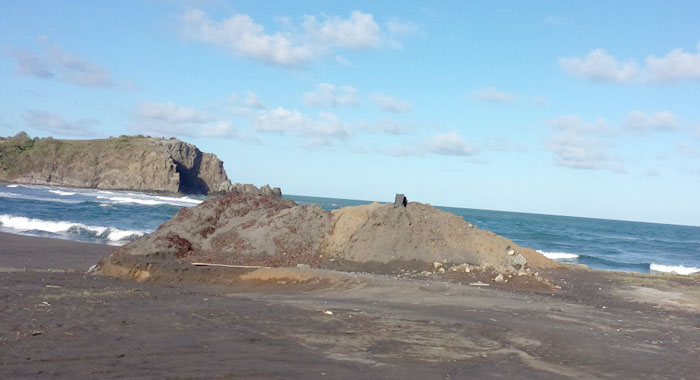 St. Vincent and the Grenadines is now at the stage where it has to seriously consider the ceasing of mining sand on its beaches, says Minister of Works, Sen. Julian Francis.

He told a press conference in Kingstown on Tuesday that this is a subject that the nation has been discussing since 1992.

Back then, Organisation Eastern Caribbean States (OECS) member countries and the British Virgin Islands did a study that explored alternatives to mining sand from beaches.

“That study was done, presented to all the islands, and, from information that I have, while we in St. Vincent introduced the matter of imported sand in the 90s, it went by the wayside because of the heavy cost of the sand and the availability of supply.”

Francis said that importing sand is a costly undertaking, adding that while it costs US$24,000 to buy 4,000 tonnes of sands in Guyana, the freight to St. Vincent is US$52,000.

He said that the three other Windward Islands — Dominica, St. Lucia and Grenada — and other OECS nations have banned sand mining on beaches.

Francis said that because of its relatively low cost compared to its alternatives, mining sand from the beach is relatively popular in St. Vincent, adding that the government continues to sell beach sand at EC$14.50 per cubic yard.

At the in-land mine at Rabacca, the government produces a sifted sand that is sold at EC$20.15 per cubic yard.

The minister said that the government was mining sand at the beaches at Brighton and Diamond.

“The tractor, most of the time, has to go close to the water’s edge and stockpile sand to sell to the trucks,” he said, adding that there is sometimes confrontation and chaos to supply sand to meet the demand in the country.

He said that come Sunday, all sand mining at Diamond will cease, and a new site will open at “Drip”, a seashore area in Rabacca, which will remain open for three months.

The minister said about 48,000 cubic yards of sand is mined at Diamond monthly.

In addition to that, the government sells about 25,000 cubic yards of shifted sand a year.

“We have been trying, I have tried on numerous occasions in the past to try and get the people of St. Vincent and the Grenadines interested in utilising the sand that we are selling at Rabacca. It is true that the distance is much further from the concentrated population area, … so that cost per truckload is a consideration.

The objection that tradesmen have in utilising the sifted sand from Rabacca is that they are not getting a fine-enough sand for plastering, Francis said.

He, however, said that some homeowners would use sand from the beach for plastering, but still finish the house with trowel plaster, which give a rougher finish than the sifted sand from Rabacca.

The minister said that the washed sand that his government is producing at Rabacca sells at EC$46.40 per cubic yard.

“And I want to encourage persons to use it,” he said.

He said that the high salt content in sand from the beach results in moisture coming through the walls, paint peeling, suspended concrete slabs shelling off, and columns and beams cracking in buildings.

The minister said that the prices of the sand the government produces in Rabacca are “are still low, compared to manufactured sand in the other islands”.

“We are at $46.40 and I am saying this to give you and alternative to the importation of sand…

“We are talking a significant increase if we are going to Rabacca to fill the demand. Rabacca, therefore, to take that on, will not have the capacity right now to sift an additional 50,000 cubic yards per year with the existing machinery…

“So that we’re gonna have to do some further investment at Rabacca to supply the demand if and when, more when that if we close off the beach mining.”

He said that when the ban on sand mining was introduced in the 1990s, it was not properly managed and there was a run on the beaches across the country.

He said that the government has taken a decision to not get involved in the importation of sand “but to offer it to the private sector on a competitive basis, so that we will have persons submitting their proposals to import sand, not to be sold to the government.

“The government will buy its own supply from them, but to be sold by the individual companies or individuals who are importing the sand.”

Francis said that if the private sector is not interested, the government will have to do it, but so far the there are two operations expressing interest in importing sand.