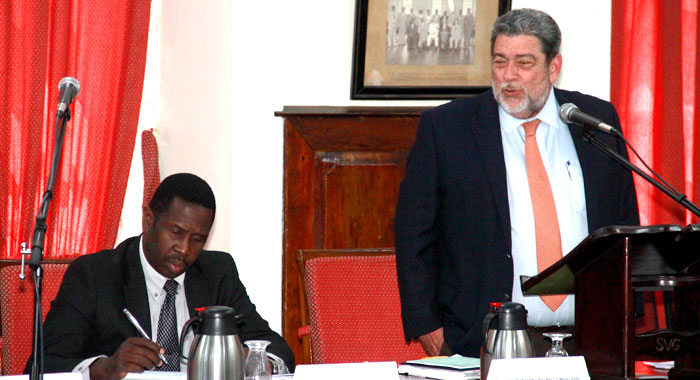 Parliament, late Thursday night, passed the Attorney General’s Reference (Constitutional Questions) Bill into law amidst continued concerns by the opposition about the aim of the bill that would seek to get from the Court of Appeal, non-binding opinions on constitutional questions.

But Prime Minister Ralph Gonsalves continued his defence of the bill, saying that it had received the support of the St. Vincent and the Grenadines (SVG) Bar Association, SVG Christian Council, and has been passed in many countries across the world, including some in the Caribbean.

Leader of the Opposition, Godwin Friday, who was overseas when the bill was first introduced on May 3, said that he understands that the draft law is similar to one passed in St. Lucia — in 2005 — and the apparent intention is to create an avenue for the taking matters of a constitutional interpretation to the Court of Appeal.

He said that the origin of the bill, as he understands it, comes from the issue relating to the motion of no confidence that opposition lawmakers brought to Parliament in January.

During that January debate, the government had said that the opposition needed to get the support of the majority of lawmakers before debate on the motion could take place.

Amidst the heated exchange, lawmakers and the Speaker, Jomo Thomas, agreed to get from the Court of Appeal, an interpretation of the relevant section of the Constitution.

“Of course, the bill is broader than that,” Friday said of the draft law that the government presented, ostensibly in response to that January agreement in Parliament.

Bringing a bill to have the Court of Appeal to rule on something that is “transparently clear” and where the practice of the house has been clear, “seems to me, Mr. Speaker, is asking us essentially, to correct an error that we don’t see is there before this house,” the opposition leader said referring to the constitutional provisions and the practice of the parliament in dealing with no confidence motions.

“What’s more, Mr. Speaker, there was reference made that there is a possibility that this bill could be used to refer the question of my citizenship as a Commonwealth citizen, what implications it has for me sitting in this House.

“That, again, is a matter that is clear: you are asking me to participate in a process that is totally unnecessary and irrelevant to my status and the representation I have provided to my constituents over the years.”

Friday was referring to the on-going debate about whether his dual status as a Canadian citizen bars him from being a member of the Vincentian Parliament, although the SVG Constitution says that to vote in general elections or to be elected to Parliament in SVG, one must be a Commonwealth citizen.

The prime minister has said that the bill does not target Friday’s Canadian citizenship.

Why only with Cabinet approval?

Friday further said that while the bill reflects one that exists elsewhere in the Organisation of Eastern Caribbean States, it seems to have some problems that internally require that he state his and opposition lawmakers’ objection to them.

The opposition leader said that constitutional questions are of serious importance to the country and noted that the bill makes provisions for persons or groups whose interests are affected to be given notice and a chance to make representation.

He, however, said that clause 3 gives the attorney general authority to bring the matter before the court, but noted that this has to be done solely with the approval of Cabinet.

“Mr. Speaker, the question that I have is why is it that this matter of general importance, a matter of the interpretation of the Constitution is left simply up to Cabinet and to the attorney general to be presented as a matter before the court?

“It would seem to me that it is a matter on which there should be some public engagement, that the matter should be alive in the public before it proceeds and you don’t find out about it on a Monday morning when it is set down on the docket before the Court of Appeal.”

Friday said that a matter of such magnitude should come to the House for debate, perhaps as a resolution so that the entire Parliament may have an input in the questions that are of general interest as it goes forward to the court of appeal.

“Right now as it is, it really is just a matter for the government to decide what questions are put forward,” Friday said, noting that the law does not even grant the attorney general power to act in his own deliberate judgment.

“That, to me, Mr. Speaker, seems very narrow and limiting and everything has to originate from the Cabinet, essentially…

“The attorney general may raise a question, but Cabinet has to approve it. Why not the Parliament? Why does the matter not get broader discussion here so that the public is alive to the issue and all parties who have an interest in the matter could then proceed with it?”

Friday, however, said that an issue of further importance is that in Clause 4, a question concerning any matter that is taken before the court for an opinion is deemed to be a matter of public interest and importance.

“I think it would be far more practical and desirable that the public knows that there is a question here that the Parliament or the government or the opposition has brought forward because it is raising some serious issues in the society that we wish to hear the court pronounce upon.”

Friday said that is not the case with the bill.

“So the bill, it seems to be progressive and a step saying that you have access to the court but that access is provided already. Litigants can go to the court and seek to have matters determined. Even in the context of litigation, they can seek a declaration on a particular point.

“But, the bill here, Mr. Speaker, simply gives that that permission to Cabinet to originate the question — well, the attorney general it says, but, obviously, with the approval of Cabinet, the real weight behind the matter going forward has to be Cabinet.

“I think that this is unsatisfactory, Mr. Speaker, and it is a matter that needs to be addressed if the bill is to have any chance of our support.”

Friday also asked why the opinions given by the court under the bill are not binding.

“I think that in the interest of avoiding doubt with respect to how the court may rule in a matter that the question, once determined, should be treated as a decision of the court, rather than an opinion of the court.”

He said that in so doing, litigants who may have a live matter before the court would know how the question is, rather than might, be determined.

“The Constitution, Mr. Speaker, is the supreme law of the land. And whenever the court rules on it, that ought to give some finality on the question. And so, our position with respect to the ruling is that should be treated as a decision and should be binding on parties going forward. Otherwise, it may seem like a terrible waste of resources to mobilise all these senior counsels and queen counsel to go and argue the question, and then it goes to naught when there is a live issue before the court.”

Opinion outside of litigation

In summing up the debate, Prime Minister Ralph Gonsalves said that even without the bill, the public interest is represented in matters, for instance, if two parties have a dispute in respect of the matter of the challenge in relation to fundamental rights and freedoms.

He said that if the attorney general is not a party to such a challenge, the Constitution Redress Rules require that the applicant prepare and leave by the registrar and extra copy of the application and the registrar must transmit it within three days to Office of the Attorney General.

“Because it is recognised that [the attorney general] has a public interest function,” said Gonsalves, who is also a lawyer.

Gonsalves cited Section 97of the Constitution, which speaks to Reference of constitutional question to High Court.

(1) “Where any question as to the interpretation of this Constitution arises in any court of law established for Saint Vincent (other than the Court of Appeal, the High Court or a court martial) and the court is of opinion that the question involves a substantial question of law, the court shall refer the question to the High Court.

Responding to the argument that the bill is unnecessary, the prime minister said that bill is saying that the government will ask for an advisory opinion outside of an active litigation.

The prime minister further said that the criminal procedure code makes provisions for case stated — a procedure by which a court or tribunal can ask another court for its opinion on a point of law.

“But all those matters relate to an active litigation which is going on.  That’s the point. So, Mr. Speaker, there is no mystery in that. But don’t — we must not befuddle people, kerfuffle people, as the Bajans would say, by saying that you have adequate provisions already.”

Gonsalves said that jurisdictions all over the world consider that it is helpful for the peace, order and good government of a country to have an attorney general’s reference.

“And this is what we have,” the prime minister said, adding that the authority given to the attorney general under the law is quite narrow compared to that in the United Kingdom.

He cited the case of Denys Barrow versus the attorney general of St. Lucia, saying that the case shows that an advisory opinion does not stop anyone from taking a case to the High Court.

In that case, Barrow a former high court judge, had taken issue with an advisory opinion of the court and had challenged it all the way to the Privy Council.

Returning to the motion of no confidence debate, which he said triggered the law, the prime minister said:

“… I ask this question, and I want the people to ponder this: I have a view on section 47(2) on the issue about consider, to consider and not to debate, and I outline all the circumstances, and, Mr. Speaker, if this matter goes before the court of appeal and the Court of Appeal rules that the views which the prime minister presented here, Parnell Campbell, Dr. Alexis, Linton Lewis and other legal luminaries that ‘listen you all are wrong and what the leader of the opposition is saying is right, and the speaker, they would say, ‘What a magnificent piece of legislation! A Daniel has come to judgement.’ But if they rule the other way, you will say, ‘You see what I tell you?’