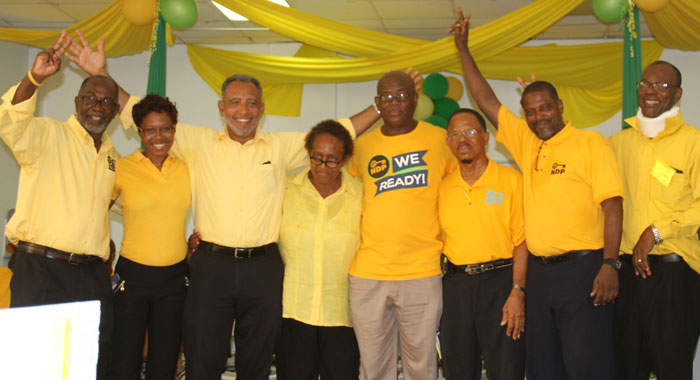 A woman-majority conference of delegates on Sunday rejected a gender-focused bid by Senator Shirlan “Zita” Barnwell to become one of the vice-presidents of the main opposition New Democratic Party (NDP).

After a largely internet-based campaign that some political observers say can be summarised as “It’s time for a woman vice-president of the NDP”, Barnwell performed dismally, mustering only 40 votes.

She gained 104 votes fewer than she did last year February, when she first made a bid to become a vice-president of the party amidst a then gaping rift between Member of Parliament for Central Kingstown, St. Clair Leacock and MP for the Northern Grenadines, Godwin Friday, who had emerged as NDP leader three months earlier.

At Sunday’s conference, Leacock comfortably scored 196 votes and MP for North Leeward, Roland “Patel” Matthews tallied 175, to retain their posts as the two equal-standing vice-presidents of the party, who are distinguished by their roles and responsibilities.

In her bid to become an NDP vice-president, Barnwell had said in a campaign speech circulated via social media that some persons were saying that now is not the time for a woman to be elevated to a top position in the party.

But from all indications, Barnwell’s failed candidacy had nothing to do with her gender but her inability to convince the party’s delegates that she deserved the position.

Some political observers had also said that is was not the time for the NDP to appear to be attempting to replace as a vice-president one of its Members of Parliament — two and a half years ahead of general elections and even as the ULP is expected to have its own leadership transition.

And while delegates did remove a woman from the executive on Sunday, they replaced her with another woman.

Doris McIntosh defeated Margaret London, 139 votes to 120, to become assistant general secretary, a position that London held for one year.

McIntosh was returning to a position that she had held in the past.

In the other vote taken on Sunday, Horace Williams scored 156 votes to Cleve Lewis’ 106 to become the party’s treasurer.

The incumbent, Bernard Mills, did not seek election.

Member of Parliament for West Kingstown, Daniel Cummings, was returned unopposed as party chair, as was Lavern King as party spokesperson.

Cummings noted to iWitness News that King was returned even though she is not based in SVG, as she is studying abroad.

“She has been working assiduously and she was the only one nominated and returned to the position,” Cummings said.

The party’s president, Leader of the Opposition and MP for the Northern Grenadines, Godwin Friday, and its general secretary, Tyrone James, have completed the first year of their three year terms, and those positions were not up for election

The party chair told iWitness News that the watchwords for the conference were “discipline and performance”, adding that the NDP conducted its business in a very democratic process

“… those who won are happy and those who did not win are satisfied and we are going forward in an even stronger team.

“It is quite evident that the ‘D’ in the NDP stands very strongly for democracy. Persons were permitted and competed very peacefully and the election shows — especially for the position of vice-presidents, we are satisfied with the two vice-presidents and they will continue to have that mandate to serve the party,” he said.

The conference formed part of the NDP’s 40th convention, which is different this year, in that the NDP has split the business and political elements of the event over two weeks.

The convention continues next week Sunday in Greiggs, and will includes speeches and cultural performances.

Cummings told iWitness News that in the past, when the party combined the business and political elements of the campaign, this presented a challenge.

He said there would be delegates and rank and file members in the hall during the morning session, but in the evening it was difficult to ask, especially, older persons who were not delegates to leave the hall.

But at Sunday’s event the only persons there were delegates.

Further, the president addressed “this very august body of the party not in a public way to target his message specifically to these members,” Cummings said.

The NDP said in a press statement that in his address, Friday spoke to several issues of national concern including his Commonwealth citizenship, and the upsurge in heinous sexual crimes and other abuses against women and young girls.

There have been calls by supporters of the ruling Unity Labour Party and others for Friday to renounce his Canadian citizenship.

Some have argued that it is unconstitutional for him to hold such a status while being an MP in SVG, while others, such as Prime Minister Ralph Gonsalves, have argued that his loyalty is divided.

“I fail to believe that the only duplicitous argument which can be manufactured by the ULP regime to discredit me, is that I, have citizenship in another Commonwealth country; this is a fact that I have never hidden. I am a Vincentian by birth, I attended university, got married and I was working in Canada, but when I got the call to serve and represent my people, I left it all and returned home.”

Friday also commented on several of the activities the NDP conducted over the past year, including the National Youth Dialogue hosted last year November.

“I meant it when I said that we will be consulting our youth; we have started the process; our youth dialogue was a game changer event. The activity afforded me the opportunity to talk one on one with our young people and they were very frank about their views, something I appreciated.”

Friday further commented on his walkabouts in the constituencies, noting that he had promised to so do and he is fulfilling that objective.

He said that the walkabouts give him the opportunity to touch base with people on a personal level, and to understand the issues affecting them.

Meanwhile, Cummings told iWitness News that since the 2015 general election, the NDP has been preparing itself for the next vote, constitutionally due by March 2021.

“The party organs have been reorganized, re-energised, and we are moving forward on all four cylinders,” Cummings said.

The NDP’s press statement said that Cummings told the conference that the NDP remains a strong and viable party because of their continued sacrifices.

He encouraged members to hold fast to their conviction and congratulated them for their continued support in the face of what he said was targeted victimisation by the ULP.