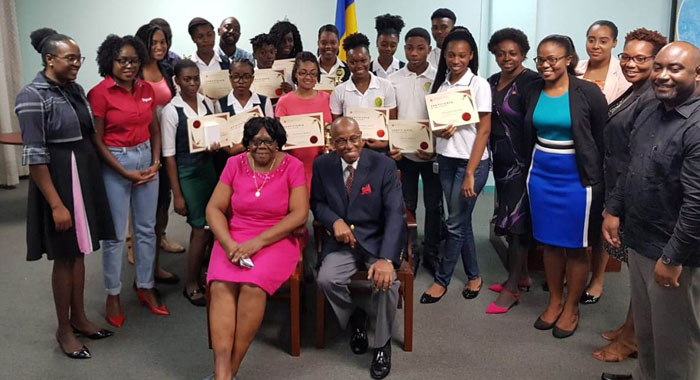 Shenico Sutherland and Lynallia Isaacs emerged as the winners in the Department of Foreign Policy and Research within the Ministry of Foreign Affairs, Trade and Commerce 2018 essay writing competition.

The finalists received cash prizes, mobile phones, and trophies whilst the other entrants received certificates on Friday at the Ministry of Foreign Affairs conference room in Kingstown.

The finalists in first to third places for group 1 (ages 21-30) were Lynallia Isaacs, Reon James and Rayana Patrick and for group 2 (ages 21-30), Shenico Sutherland, Emil Dougan and Nicolette Nichols.

The essay topic for group 1 was: “The opening of the Argyle International Airport will provide St. Vincent and the Grenadines air access to new international markets. In what ways can the new international airport facilitate increase foreign investment and aid in diversifying our trade portfolio?”

The topic for Group 2 was: “As of January 2017, St. Vincent and the Grenadines began a 3 term on the United Nations Economic and Social Council (ECOSOC), additionally this country is bidding for a seat on the UN Security Council as a non-permanent member. How is it beneficial for a small country like this one to serve on these international committees?”

Permanent Secretary in the Ministry of Foreign Affairs, Trade and Commerce, Sandy Peters-Phillips, extended sincere thanks to youths at the secondary and tertiary levels who submitted entries in the competition. Phillips said the future of policy in St. Vincent and the Grenadines is indeed secure with the interest shown in the competition. She congratulated the winners for well-argued and thought out essays.

She thanked Digicel and the Government of India for their support. She encouraged participants to pursue careers in foreign affairs and that the doors of the Ministry are always open. She urged them to remain focused to ensure their dreams become shared realities.

Minister of Foreign Affairs, Trade and Commerce, Sir Louis Straker, said the essays reflected that our young people are thinking about international issues. He urged them to continue to think, to do well and to use their time profitably. The Deputy Prime Minister used the opportunity to urge youths to read and to think on what the author is saying. He congratulated all the participants in the essay competition.

Senior Foreign Service Officer, Tamira Browne, congratulated everyone and encouraged them to continue to enhance their writing skills. Browne said they had entries from the West St. George and Buccament Bay secondary schools, St. Vincent and the Grenadines Community College, and other young professionals. According to Browne, the Foreign Policy and Research Department has plans to add a category for primary schools in the near future.

Digicel’s Marketing Executive, Jamisha Wright, was present to hand out prizes. Wright said Digicel is pleased to be on board since the inception of the essay competition and pledged the company’s continued support to the competition noting that the contribution of the participants was invaluable.