4 men in custody in connection with ‘vigilante’ attack at funeral 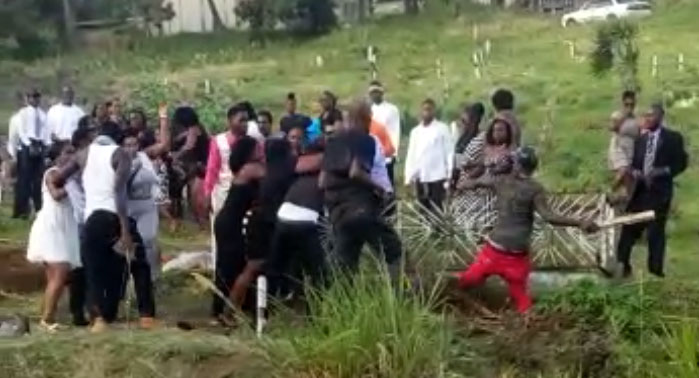 In this image, taken from a video, a man, in red pants, prepares to strike Paul Stephens at Thomas’ funeral in May 2018.

Police have taken four men into custody in connection with the savage beating of a widower at his wife’s funeral at the Chauncey Cemetery on Sunday.

Paul Stephen was attacked as he and other mourners paid their final respects to Je-Tonnia Thomas-Stephens.

Mr. Stephen, a 42-year-old businessman originally from Chateaubelair, met his 32-year-old wife dead at their Keartons, Barrouallie home around 6 a.m. on May 10.

It was widely rumoured that the woman’s throat was slit and a photo was circulated on social media purporting to show this.

But police said that same day that there was no sign of violence on Mrs. Stephen’s body.

An autopsy found that the woman died of cardiac arrest, brought on by an undiagnosed condition that led to her heart being larger than normal.

According to reports, some persons, not satisfied with the findings of the pathologist, attacked Mr. Stephen at his wife’s funeral in her home village on Sunday.

In a statement on Tuesday, police “unequivocally” condemned what they described as “the vigilante-style beating” of Mr. Stephens.

“According to reports and a video that has been circulated on social media, Mr. Stephens was viciously attacked and beaten by a group of persons while the remains of his late wife were being laid to rest. “

The video shows a group of men savagely beating Stephens with rocks and a piece of wood.

Witnesses say at least one female mourner used her body to try to protect the grieving man from the blows.

“This mob style approach to justice is reprehensible and totally unlawful. St. Vincent and the Grenadines is a country of laws and if any citizen feels aggrieved by the actions of another citizen, the right course of justice is to report the matter the police,” acting Commissioner of Police Colin John said in a statement issued through the Public Relations and Complaints Department.

“As Commissioner of Police, I wish to advise and encourage the citizens of St. Vincent and the Grenadines not to take the law into their own hands but rather to be law-abiding citizens.

“This barbaric incident comes on the heels of a similar incident on May 18, 2018 in Petit Bordel where a suspect in a sexual assault case was badly beaten,” the statement further said.

It further reported that Stephens has made a report to the police and that four males were in custody assisting the police in their investigations.