Peto man is Fisherman of the Year 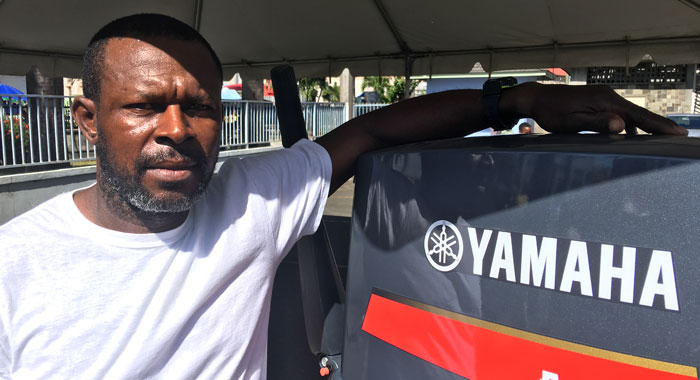 Fisherman of the Year 2018, Philroy Matthews poses with his prize. (iWN Photo)

A 43-year-old Petit Bordel man who has been fishing for 17 years, won the Fisherman of the Year competition 2018 after landing 928 pounds of fish.

“I won a lot of second and third [prizes]. I feel proud winning [the first prize] this time, because it is the first time I am winning for all the years I have been trying,” Philroy Matthews told iWitness News after receiving his prize in Kingstown on Friday.

Matthews and his other crew member Raphael Edward travelled some 43 nautical miles to the south east of St. Vincent during their fishing expedition on May 21, when the prize giving ceremony in Calliaqua was postponed because of bad weather.

“The weather was bad but we are accustomed to that,” he said, adding that they took two hours to get back to shore after his catch of tuna, amber couvalli jack, and dolphin fish (mahi-mahi).

Matthews won a 75-horsepower Yamaha outboard engine, a trophy, one case of outboard oil, and a case of Guinness.

Michael Cordice landed 865 pounds of fish to win the second prize, while Cliff Young was third with 495.5 pounds.

Meanwhile, Minister of Fisheries, Saboto Caesar told the ceremony at the Fisheries Conference Room in Kingstown that the nation’s fishers landed twice as much this year.

2 replies on “Peto man is Fisherman of the Year”