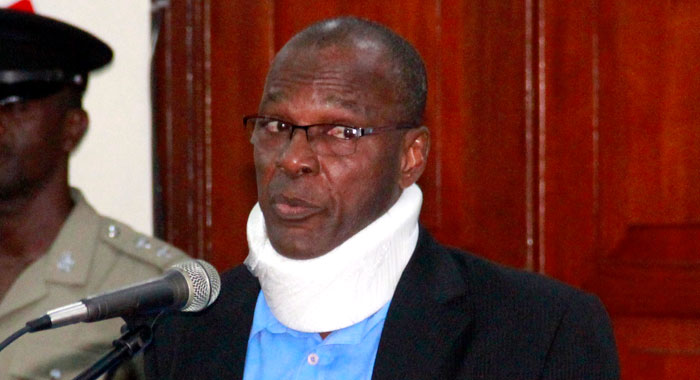 Member of Parliament for West Kingstown, Daniel Cummings wearing the neck collar in Parliament on May 24. (iWN photo)

Member of Parliament Daniel Cummings says that his doctors have forced him to wear a neck collar for the next three months because of injuries he sustained when he was thrown out of the parliament building in 2011.

“This is something that is consequent upon the cruel action taken by members of the police force in 2011 against me and other members of the party,” Cummings told iWitness News on Sunday of the neck collar that he was also seen wearing in Parliament last Thursday.

He said that when he and other opposition lawmakers were physically removed from Parliament, he damaged his back and neck.

“Three years ago, I had to undergo major surgery for my back in Trinidad,” said Cummings, who uses a special chair in Parliament because of his back condition.

“That (his back) is going well but recently, the MRI of my neck has indicated that the damage to the discs, the bones are growing in a peculiar manner, that the bone is now impinging on the spinal cord as well as the nerve endings that come back out and control my knees and my shoulders.

“So, the medical experts have forced me for the next three months to wear this collar and have indicated that surgical intervention is absolutely necessary to correct the growth of the bone that is beginning to squeeze the nerves in the spinal column. And you would understand how critical it is when the spinal column is affected,” he said, noting that former cricket Winston Davis is paralysed from the neck down because of a neck injury.

“So, I have to undergo additional surgery to correct the growth of the bone consequent upon the damage caused by the trauma these men inflicted on me.”

Cummings told iWitness News he is not sure how much the surgery will cost but said the first one cost “near TT$200,000”

“The one for the cervical vertebrae is far more intricate that the one for my back.  But God is good.”

Cummings said that wearing the collar “is the most uncomfortable feeling especially in this climate.

“But cognisant of the importance of listening to the medical experts — the thing is, it’s not that the neck is paining me in any extreme way but to prevent any further aggravation that would encourage the bone to continue to grow in that direction, they have advised that even when I am sleeping I should try to wear the collar. It is very uncomfortable but for my own sake, I don’t have a choice,” he told iWitness News.

Cummings is into a second term as Member of Parliament for West Kingstown.