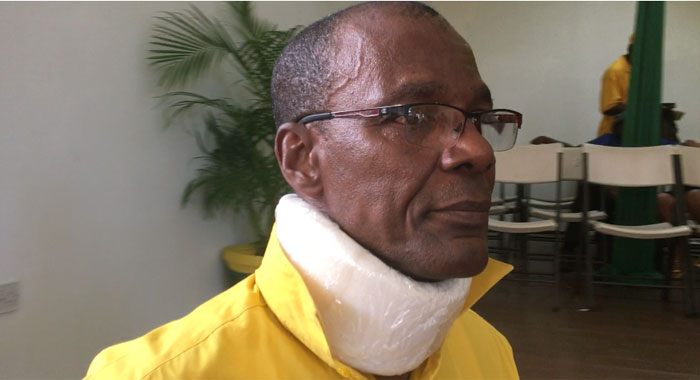 Opposition lawmaker Daniel Cummings says his doctors have ordered him to wear a neck brace because of an injury he sustained when opposition parliamentarians were thrown out of the national assembly in 2011. (iWN photo)

Member of Parliament for West Kingstown Daniel Cummings says he wants to know why a lawsuit he brought against the government is yet to be heard, five years after it was filed.

Cummings, an opposition lawmaker, is suing the government over damage he said he sustained to his neck and back when he and other opposition MPs were physically removed from Parliament in March 2011.

He said that in 2013, he filed the lawsuit against then Speaker of the House of Assembly, Hendrick Alexander, the Attorney General, and the police.

“The matter came up, I think, twice in 2013 and since then, you can’t get a date for it to be heard,” Cummings told iWitness News on Sunday, in Kingstown, at the end of the conference of delegates of the New Democratic Party — of which he is Chair.

“I have recently gone and sat down with the Registrar of the High Court and brought it to her attention and she promised to look into it and advise me. I wait on her before I take next steps,” Cummings said.

“But since the matter came up in 2013, it has not seen the light of day, and this is really troubling to me. So, I have approached the registrar of the high court for her to try to explain to me why this is so and she promised to get back to me soon.”

His attorneys are Keith Scotland of Trinidad and Tobago, and Maia Eustace, and Stalky John, QC of St. Vincent.

“Financially, it has not been easy, but what price you put on one’s health?” Cummings said when asked how he has been affected by the injury.

“I am also grateful to my dear wife, who, as you know, cannot live and work here (in St. Vincent) and is in Trinidad and Tobago and I am fortunate to be able to rely on her because, as you know, as a Member of Parliament in opposition, EC$2,000-plus a month from which tax comes out doesn’t afford one an opportunity to live, so I am grateful to have a wife who’s very kind to me.”

Cummings said the wait for the case to be heard has been “exceptionally long, especially when you consider, for example, the prime minister takes somebody to court, within a few months, the matter is before the court.”

In giving an example, Cummings said that the prime minister accused him several years ago of slandering him.