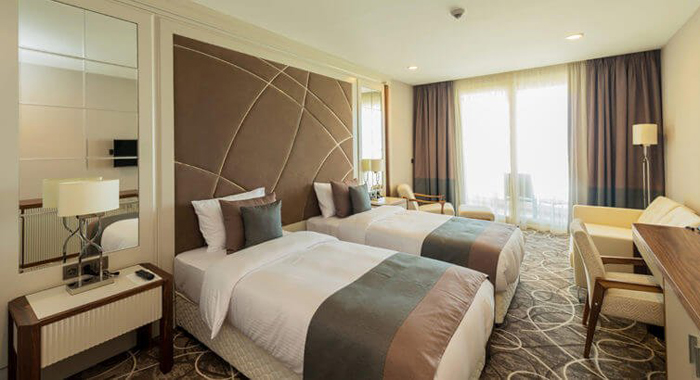 The main opposition New Democratic Party (NDP) is calling on hoteliers to speak out publicly about the impact on their operations of the EC$8-per-night levy, which came into effect on June 1.

“Hotel operators, for God’s sake, I tell you, speak up. It is not too late. Don’t wait for me, don’t wait for the members on this platform here to take your fight all the time. Don’t speak in a boardroom. Speak publicly and say how you feel about the tax. What more can they do to you? They’re taking away your livelihood. Don’t let them think, as Poorsah say, that yo’ left yo’ mouth in a yo’ mumma,” Opposition Leader and NDP president, Godwin Friday said Sunday at a rally in Greiggs to mark the NDP’s 40th convention.

Hotel operators have remained silent on the levy, but their umbrella body, the St. Vincent and the Grenadines Hotel and Tourism Association, wrote, in February, to Minister of Finance Camillo Gonsalves expressing concern about the Climate Resilience Levy, which would be passed into law on May 3.

Notwithstanding the group’s concerns about the potential negative impact of imposing a tax of US$3 per night on land-based visitor accommodation, the government went ahead and passed the levy into law.

Speaking on Sunday, Godwin Friday, who is the opposition spokesperson on tourism, said that the Vincentian economy “is failing, businesses are closing, and people are daily losing their livelihoods, and sadly, many are losing hope.

“Like agriculture, our tourism is in decline. Can you believe that this government– the geniuses running our country– have just imposed a tax on hotels and guest houses of $8 per room per night?” he told party supporters.

“They say to raise money for fighting effects of climate change.  They have done this even though the Eastern Caribbean Central Bank figures have shown that the stayover visitors in St. Vincent and the Grenadines, the numbers have declined significantly over the past ten years.

“So why tax a declining industry? They want to kill it, like they killed bananas? You see, they don’t really care just as long as the government gets its cut, they don’t care about the rest of us,” Friday said.

In the Feb. 15 letter to the finance minister, head of the SVG Hotel and Tourism Association, Fitzroy O. Glasgow asked the government to reconsider the tax or to delay its implementation until January 2019.

In making his organisation’s case, Glasgow noted that during the budget consultation, tourism stakeholders had expressed concern about the implementation of the tax in the middle of the year “after our room rates have been published, rooms pre-booked and new deals negotiated with our partners in various marketplaces”.

In the letter, which was copied to Minister of Tourism Cecil “Ces” McKie and Chief Executive Officer of the Tourism Authority, Glen Beache, Glasgow said that the SVG visitor accommodation sector experienced, in 2017, a lower occupancy level than in 2016.

“For a destination that struggles each year to achieve a national occupancy level of 50%, this is extremely disturbing,” Glasgow said of the tax.