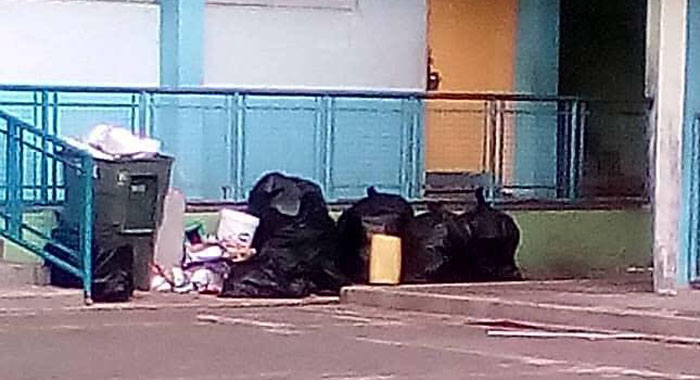 The NDP says that it was not told on Tuesday about the garbage that was cited as the reason for the closure of the school on Wednesday. (iWN photo)

Opposition politician Israel Bruce is doubting that the alleged stench of chicken water forced the Greiggs Primary School to be closed on Wednesday, three days after his New Democratic Party (NDP) had its convention there.

“There was no stench from the school that emanated from any chicken water,” Bruce told iWitness News of his experience when he visited the school on Wednesday.

He said that chicken was cleaned inside the tuck shop Saturday night, and when the cleaning was being completed, the NDP’s team was power-washing the area of the hard court where it was later said the stench was coming from.

“It was not possible for them to be throwing chicken water at that end,” Bruce said, adding that the “slight stench” was that of the moss that his cleaning crew had removed from the clogged drain that had earlier resulted in frequent flooding of the hard court.

“Because now that the sun was hitting the moss, it gave a slight odour — nothing that required the students from the school to be sent home. And I am satisfied in my mind that politics was used in that regard to deliberately send the children home and try to blot on NDP’s image.”

He said he believes members of staff at the school used politics.

“In my mind, I am satisfied that the parliamentary representative was somewhere behind it. I am saying how I feel. I may be wrong on it, but that is how I feel,” Bruce said.

On Tuesday, news broke that the head teacher at the school, Margaret Lewis-Jackson, sent the students and staff home at noon after they could no longer cope with the stench from two portable toilets that had not been removed two days after the convention.

One person who visited the school on Tuesday told iWitness News that the offensive stench was not of sewerage, but of the chemical used in the portable toilet.

The person told iWitness News that the smell left them nauseated.

The NDP issued a statement Tuesday night apologising for the situation, saying that the service provider did not remove the portable toilets after the rally, as agreed.

But, some persons raised questions about why the management of the school allowed the toilets to remain on the compound all day Monday before highlighting the situation.

Then, on Wednesday, the students were sent home again, allegedly because the NDP was yet to remove some bags of garbage from the schoolyard.

Bruce is the NDP’s candidate for South Central Windward, where the primary school is located.

He told iWitness News, Wednesday night, that he had gotten a call earlier that day from an official at the

The official also said that there were a few bags with garbage that were still on the compound, Bruce said.

He said he told the official that it was not possible for any chicken water to be on the compound, but he added that he said that it been arranged for villager Chiefton Thomas to have disposed of the garbage on Monday morning.

Bruce said that a service provider had been paid to provide the toilets but he does not know the name of the company because he did not deal directly with them.

He told iWitness News that on Wednesday he asked why the information about the garbage on the compound was not communicated to him on Tuesday afternoon also.

“When I heard about the portable toilets, I took it for granted that the gentleman who was charged with the responsibility to take the garbage and dispose of it that he had done that and that was out of the way.”

He said that when he heard Wednesday morning that a few bags of garbage were still at the school “I was most disappointed so I decided that I was going to go on the scene.”

Bruce said that the three or four bags of garbage that were left there on Sunday were removed and taken away.