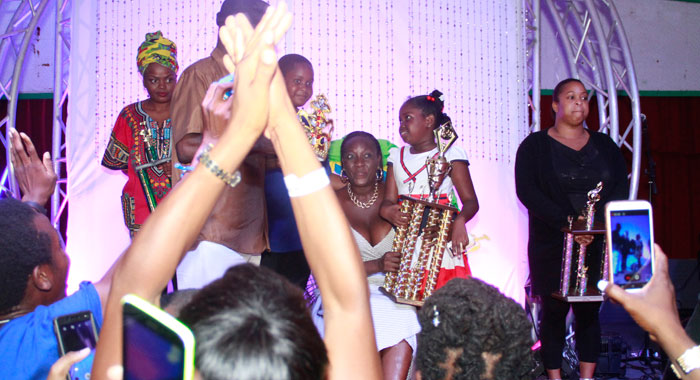 Joanna “Nubian Princess” Christopher’s calypso highlighting the increasing cost of living in St. Vincent and the Grenadines won the judges’ nod ahead of 14 other contenders to take the Queen of Calypso 2018 competition in Kingstown Friday night.

The bard’s “Everything Gone Up” won her the crown on the return of the competition after a 15-year absence.

She defeated some seasoned campaigners, four of whom had won various calypso crowns, including eight-time Junior Calypso Monarch, Shaunelle McKenzie.

Her win was even more stunning in light of the fact that this is only Nubian Princess’ second year of competition.

Last year, Nubian Princess stepped from behind the back vocalists’ microphone and onto centre stage to compete in the National Calypso Monarch competition for the first time.

In performances that showed her natural talent and potential, Nubian Princess placed third in the 2017 National Calypso Monarch competition.

In securing the Queen of Calypso Crown, Nubian Princess denied Shaunelle who also seems to push open the door to the calypso throne room only to watch someone else’s coronation.

For yet another year, Shaunelle might have been left thinking “Life Isn’t Fair”, as she sang in Friday’s competition.

Her song featured a man’s perspective on the apparent bias of the judicial system towards women as far as child support and custody hearings are concerned.

If there were a prize for the most humorous calypso, it might have gone to Denise “Lady D” Stephens whose  “Only P” addressed the issue of public urination.

The Calypsonians’ Association, which produced Friday’s show, proved that a calypso event could run smoothly and be very entertaining.

The competition element of the show was completed in just about two hours, although each calypso was about seven minutes long.

Patrons were well on their way home before midnight.