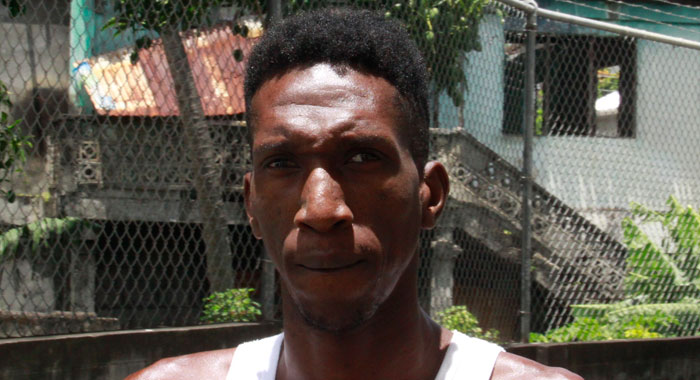 Allan Campbell on his way to prison on Monday. (iWN photo)

As he was being escorted to prison on Monday, North Leeward resident Allan Campbell acknowledged that he had not acted wisely when he told the Serious Offences Court that he could pay an EC$5,500 fine in two weeks.

The man was escorted to prison after being unable to come up with EC$1,500, which he needed to pay forthwith to avoid five months in jail.

Campbell had earlier pleaded guilty to a charge that on Sunday, June 10, at Coulls Hill, he had in his possession 2,711 grammes of cannabis with intent to supply it to another.

The court heard that about 11 p.m., police officers from the Rapid Response Unit were on mobile patrol in the North Leeward area.

On reaching the Coulls Hill Public Road, they signalled PM985, a Rav4, which was travelling from the direction of Kingstown, to stop.

When cautioned, Campbell said, “Ah my bag, officer. Me just pick up some weed dey.”

Asked what he had to say for himself, the defendant told the court that sending him to prison would be a waste of time.

He said that if a custodial sentence is not imposed, he could sell his drink and clothing and pay a fine.

Chief Magistrate Rechanne Browne-Matthias, noting that Campbell had no previous conviction, had pleaded guilty at the first opportunity, and is “relatively young”, said that a custodial sentence as a first option would not be appropriate.

She noted that possession of cannabis in St. Vincent and the Grenadines is still illegal and that the defendant had a relatively large quantity in his possession.

When the chief magistrate announced the EC$5,500 fined, Campbell smiled.

He said he would be able to pay the full amount in two weeks.

He further told the court that he would make some calls to find out how much of the money he would be able to pay that day.

However, when the matter was recalled after some time, Campbell said he was only able to raise EC$500, adding that he was trying.

The magistrate suggested that if a fine would be too onerous, she could impose a custodial sentence instead.

However, Campbell asked for more time.

The magistrate therefore ordered him to pay EC$1,500 forthwith or go to prison for five months.

He was further ordered to pay the remaining EC$4,000 by July 6 or spend an additional 10 months in jail.

Campbell was unable to pay the amount by the time court adjourned for the day and was escorted to prison.