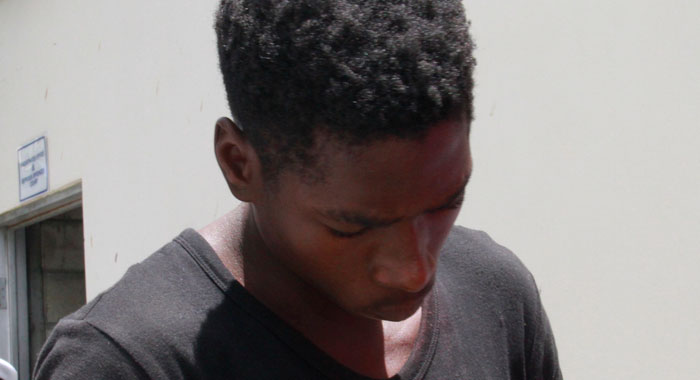 The accused, Clifton Williams, lowers his head in an attempt to avoid being photographed outside the Serious Offences Court on Monday. (iWN photo)

A 20-year-old Ottley Hall man, on Monday, was granted bail because there was no police officer in court who could advise the prosecution.

“I have no instruction so I have no objection,” Senior Prosecutor Adolphus Delplesche told the Serious Offences Court after Clifton Williams had been read an indictable robbery charge.

“The police landed him and departed,” Delplesche said after the only detective present in court said he was not familiar with the case or the accused.

Delplesche then told Chief Magistrate Rechanne Browne-Mathias that should bail be considered, he would ask that the accused man provide sufficient surety.

Williams was then granted EC$3,000 bail with one surety.

He was further ordered to report to the Central Police Station on Fridays between 6 a.m. and 6 p.m.

The accused man returns to court on Oct. 18, 2018 for a preliminary inquiry into the indictable charge.

He is charged that on May 5, 2018, at Kingstown, he stole one canvas backpack, value EC$25, one bottle of Radox Shower Gel, value EC$22; one men’s body spray, value EC$10; one grey t-shirt, value EC$20; one small Spa Conditioner, value EC$20; one SVG Passport form with stamps, value EC$15; four passport photographs, value EC$11, one Colgate toothpaste, value EC$9 ad one toothbrush, value EC$5; total value EC$155, the property of Jerry Jardine of Villa and at the time of so doing and in order to do so, used force on Jardine.

One reply on “Ottley Hall man charged with robbery”