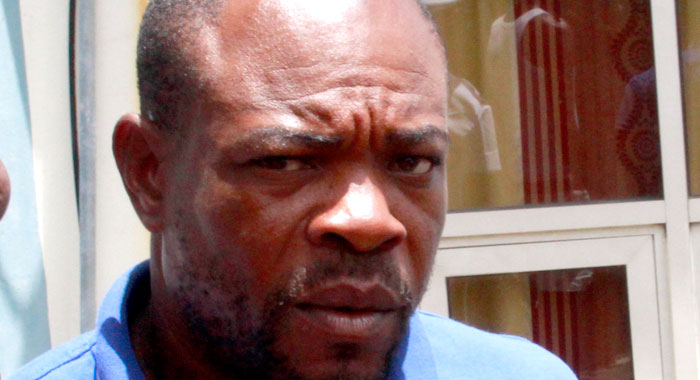 Rohan Primus leaves the Serious OffencesCourt after his arraignment on Monday. (iWN photo)

The Union Island man who is seen in an April 2018 video asking that monies be paid so that he and another man would not be killed is now facing a drug charge.

Rohan Primus was brought before the Serious Offences Court in Kingstown on Monday charged with possession of 95,794 grammes (211lbs) of marijuana.

Prosecutors are alleging that Primus had the drug in his possession with intent to supply it to another.

He pleaded not guilty to the charge when he appeared before Chief Magistrate Rechanne Browne-Matthias.

Primus was granted EC$50,000 bail with one surety.

He was also ordered to surrender his travel documents and report to the Union Island Police Station on Mondays between 6 a.m. and 6 p.m.

The next court date is June 29.

In April, a video began making the rounds on social media showing Primus and another man begging persons they called “Abijah” and “Africano” to pay money to secure their release.

The video was reportedly filmed in Venezuela and the other man in the video was later identified as Grenadian Marlon Garraway.

Reports out of Grenada are that the men’s alleged captors had demanded US$30,000 for their release but had released them after receiving some US$5,000.

Garraway’s family is said to have been able to raise that amount with the help of the Grenadian public, which made contributions.

On Monday, Primus confirmed to iWitness News that he was one of the men in the video.

Primus is said to have returned to Union Island sometime in May.