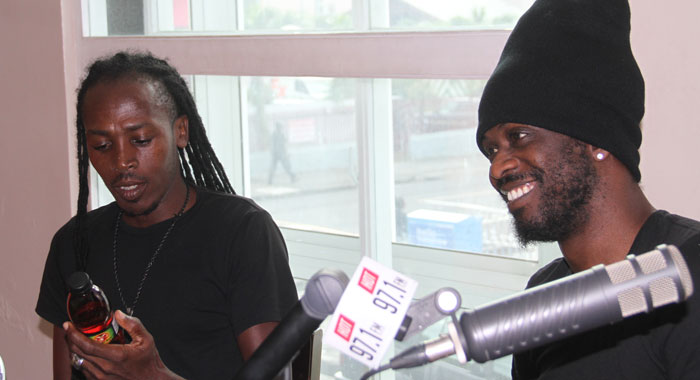 Skinny Fabulous, right, and Fireman Hooper at the studios of Hot 97 in Kingstown on Wednesday. (iWN photo)

Gamal “Skinny Fabulous” Doyle has come out of “retirement” from the soca monarch competition and will try to defeat his archrival, Delroy “Fireman” Hooper in this year’s completion.

Doyle is among 25 artistes who has made it to the June 23 semi-finals of the competition, and is expected to easily advance to the finals.

What remains to be seen is how the competition will play out between him and “Fireman” and their respective fans amidst the artistes’ domination of the competition over the past 15 years.

“It is a competition that people love and I have to be there for the people,” Skinny told iWitness News at the studio of Hot 97 FM on Wednesday, where he and Fireman appeared on air together for the first time in the station’s 16-year history.

“At the end of the day, I can’t fight it.  For me, it is not about coming in to — legend against legend,” he said, pointing to himself and Fireman

“It is a matter of just reigniting the vibes, making sure the culture go on strong and hot,” Skinny further said.

After a disappointing performance that saw him placing third in 2016, Fireman put on a show last year that showed why he is one of the nation’s most successful and loved soca artistes.

In the process, Fireman unseated the 2016 monarch, Shane “Hyper 4000” Husbands, sending him and his “Riddim Section” into third place in a reversal of the 2016 placements.

In a Facebook post in June 2016, Skinny explained his decision not to defend the Ragga and Power Soca crowns he had won the previous year, saying he had announced his retirement from the competitions since 2015.

In the Facebook post, Skinny spoke of the incident in 2014 when patrons booed  and pelted the stage with debris as soon as he was announced as the next artiste to perform.

“For reasons still unknown to me, I was booed and stoned before even singing a note on the mic,” said the “The General” who has become an international soca sensation.

“I came on and performed and still showed love to those who booed me and those who cheered all the same,” he said.

In 2014, when the booing incident occurred, Skinny was the defending champion in the Power Soca category of the competition having secured the 2013 crown with “The General”, when he forced his biggest challenger over the years, Delroy “Fireman” Hooper into second place with “Undertaker”.

And in 2015, he returned with a vengeance, taking both crowns, even as it was his first entry into the Ragga Soca competition.

And, to add insult to injury, he stayed away from the competition in 2016 and threw his support behind Hyper 4000 to ensure a humiliating defeat for Fireman — or so the conspiracy theory goes.

But now, two years on from all that, the artistes are making historic appearances together.

Asked on Wednesday what people can expect from him at Soca Monarch 2018, Fireman said, “I don’t know yet.”

“I don’t even know if I am going to make it in the competition… They haven’t chosen me yet.”

Fireman said that even after artistes make it to the finals of the competitions, they still have to go through a process of randomly selecting their order of appearance “and all these things”.

The duo had appeared on air to discuss Black Rave, a Skinny Fabulous franchise show, slated for Saturday.

“We are here to tell people that Black Rave is this Saturday and Fire and I will be performing …” Skinny told iWitness News.

Asked if they have buried the hatchet, Fireman said, “We’re doing pound for pound on Saturday.”

2 replies on “Skinny comes out of Soca Monarch ‘retirement’(+Video)”