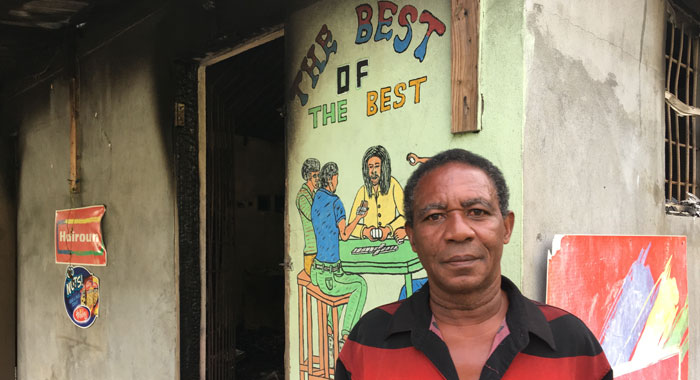 Police in Barrouallie have arrested two females and five males in connection with the burglary and burning of a shop in the Central Leeward town sometime Saturday night.

The shop was owned by businessman Rawle Francis, 63, of Barrouallie, who began operating it about five years ago.

Francis opened the business after returning from the United States, where he worked as a salesman and mechanic.

The Glebe Hill, Barrouallie, resident told iWitness News he was at home when he received a call about 5 a.m. Sunday saying that the shop, located in Pierre Hughes, another area of Barrouallie, was on fire.

“The whole place was on fire blazing,” Francis told iWitness News outside of the burnt-out shell of his business place on Monday evening. As they awaited the arrival of the fire truck from Kingstown, villagers made a futile attempt to contain the fire using water from a garden hose.

However, by the time the fire truck arrived from Kingstown, they were too late to save the contents of the building: a three-room single-story concrete structure.

Francis estimates at EC$20,000 the value of the stock that he lost in the blaze.

This is not to count the cost of the equipment and appliances, including a freezer that he bought for EC$3,000 three weeks before the blaze.

The fire also destroyed the roof of the building.

“I had just finished shopping. The truck came and I shopped for the groceries,” said the businessman who usually buys his goods from merchants in Kingstown, which then deliver them to the shop.

“Friday I just got a lot of stuff from Coreas and other trucks,” said Francis, who coughed intermittently during the interview in an apparent attempt to prevent himself from crying as his voice began to break with emotion.

“That’s my livelihood. The people in the neighbourhood love my shop because I am a person who loves kids.  Birthday time, I give the kids them bags of stuff for their birthday,” said Francis, whose children, all adults, live in the United States.

Among the items destroyed by the fire was a cooler that the businessman used to store eggs, a freezer for drinks, a television, and a stereo set.

His brother had recently sent him a karaoke machine and that is unaccounted for, having either been stolen or destroyed in the blaze, Francis told iWitness News.

Francis theorised that after raiding the shop, the burglars set it ablaze to hide their crimes because he has a surveillance system installed.

The property included a room with a bed where Francis would rest during the day when his wife came on shift.

He, however, did not spend the night there.

Police have recovered about six bags of items believed to have been stolen from the shop and are expected to lay charges soon.

Members of the public are sad about the burglary and destruction of the business, which is among the village shops that still offer items on credit.

“They usually pay, so I offer them credit,” Francis said.

One woman who was looking on at the damage told iWitness News how she felt.

“I feel real bad ‘bout it because here is a place I [am] accustomed hanging out and I know Rawle for a long time, so I really feel bad about it,” she said.

It is not the first time that the shop was burglarised.

On the previous occasion, one of Francis’ cousins, a police officer who lives nearby, nabbed the perpetrator. The stolen items were recovered and the burglar spent six months in jail.

And, on one occasion, two masked men robbed Francis while he was on his way home and relieved him of EC$1,500 in cash.

On another occasion, an unknown person snatched his bag off his shoulder and ran.