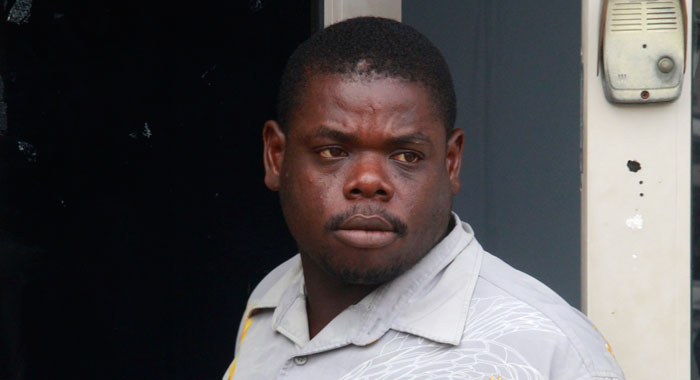 A man who appeared to not know what month of the year it was, understood one thing very clearly at the Kingstown Magistrate’s Court last week: “Mental Health Centre” and that he did not want to go there.

The man, Michael Lewis, was brought before the court on a charge that he stole two 89-millilitre bottles of Johnson’s Baby Oil from Jax Enterprises, in Kingstown, on June 18.

The court heard that on the day in question, a security officer saw Lewis enter the store, visit the cosmetics area, went up one floor then left the store.

The security guard found this strange and checked the video recording, which showed that Lewis had taken the two bottles of oil, placed them in his pocket and left the store without paying.

When the surveillances images were replayed they showed Lewis stealing the two bottles of baby oil.

The security officer caught up with Lewis in Middle Street and he was arrested and charged.

When the magistrate asked Lewis how old he was, Lewis scratched his head and said was born in the hospital “the 10th year”

Asked what was the date of his court appearance – June 19, Lewis said “21st ah August”.

Lewis further told the court that he works washing bottles and carrying “loads” (as a porter) for people.

When the magistrate asked Lewis why he stole the bottles of baby oil, Lewis said: “Dem say me tek them. They man say me tek dem.”

At this point, the magistrate said, “you know what I am contemplating? Whether he should go and see Dr. Providence.”

Burnett was referring to Registrar of Mental Health Centre, Karen Providence, whom he had summoned to court that day to explain the delay in the centre sending to the court reports on psychiatric evaluations the court had ordered on three accused persons.

“He is showing obvious signs that he isn’t quite with us,” the magistrate said of Lewis, who the court would later learn had been sent to the centre before for evaluation.

At that point, lawyer Grant Connell, who was sitting at the bar table was asked to comment.

He said that while the defendant appeared to be “slow”, he didn’t seem to be mentally unfit.

Connell said that regrettably, the Mental Health Centre is the only facility in St. Vincent and the Grenadines where persons can be sent for evaluation.

The magistrate then asked where he should send the defendant.

Connell said he knows “a couple people in St. Vincent and the Grenadines who are a couple hands short of a picnic basket.

“If we send everyone there (Mental Health Association), the place would be overflowing.”

The magistrate said it was important that whatever punishment was handed down on Lewis that he be made to understand that what he did was wrong.

Connell suggested a few strokes, but the magistrate quickly rejected this idea, saying that he had floated the idea recently and it led to public uproar.

Counsel Roderick Jones, who was also at the bar table suggested community service, adding that he did not think that a stint at the MHC was appropriate.

Burnett rejected that suggestion, saying, “I don’t want him to walk out of court and feel it was a good day on the job. A good day in Kingstown, He should leave the court thinking he was close to prison.”

The magistrate said it is his responsibility to help to protect the society.

“These petty thieves are a daily occurrence in Kingstown and to come to court and tell them to go and wash cars? I am not at that stage in life as yet,” said the magistrate.

He was referring to the washing of senior police officers’ vehicles, the task said to be often assigned to convicts sent to the Central Police Station in Kingstown.

The magistrate further said that the officers might “steups (kiss) their teeth” when they see Lewis coming to perform community service.

The prosecutor, Police Constable Corlene Samuel told the court that Lewis is known around Kingstown and was working on a truck.

In the end, the magistrate decided to bond Lewis for three months, with a term of three months in prison if he breaks the bond.

The magistrate asked counsel Jones to explain Lewis’ punishment to him.